Rate can't be blank.
Name can't be blank.
Email can't be blank.
Content can't be blank.
Thanks for your review! it will be published soon. Thank you! your review was submitted
John C
This is an easy to use, lightweight power supply with great power output.I used it primarily to light a string of LED lights at our cottage by our firepit down by the Lakeshore where I have no AC power. It works like a champ!A whole evening (probably 4 or 5 hours) down by the firepit and these lights only used about 12% of the battery power.I also charged my cell phone at the same time.It's a great product that I highly recommend. 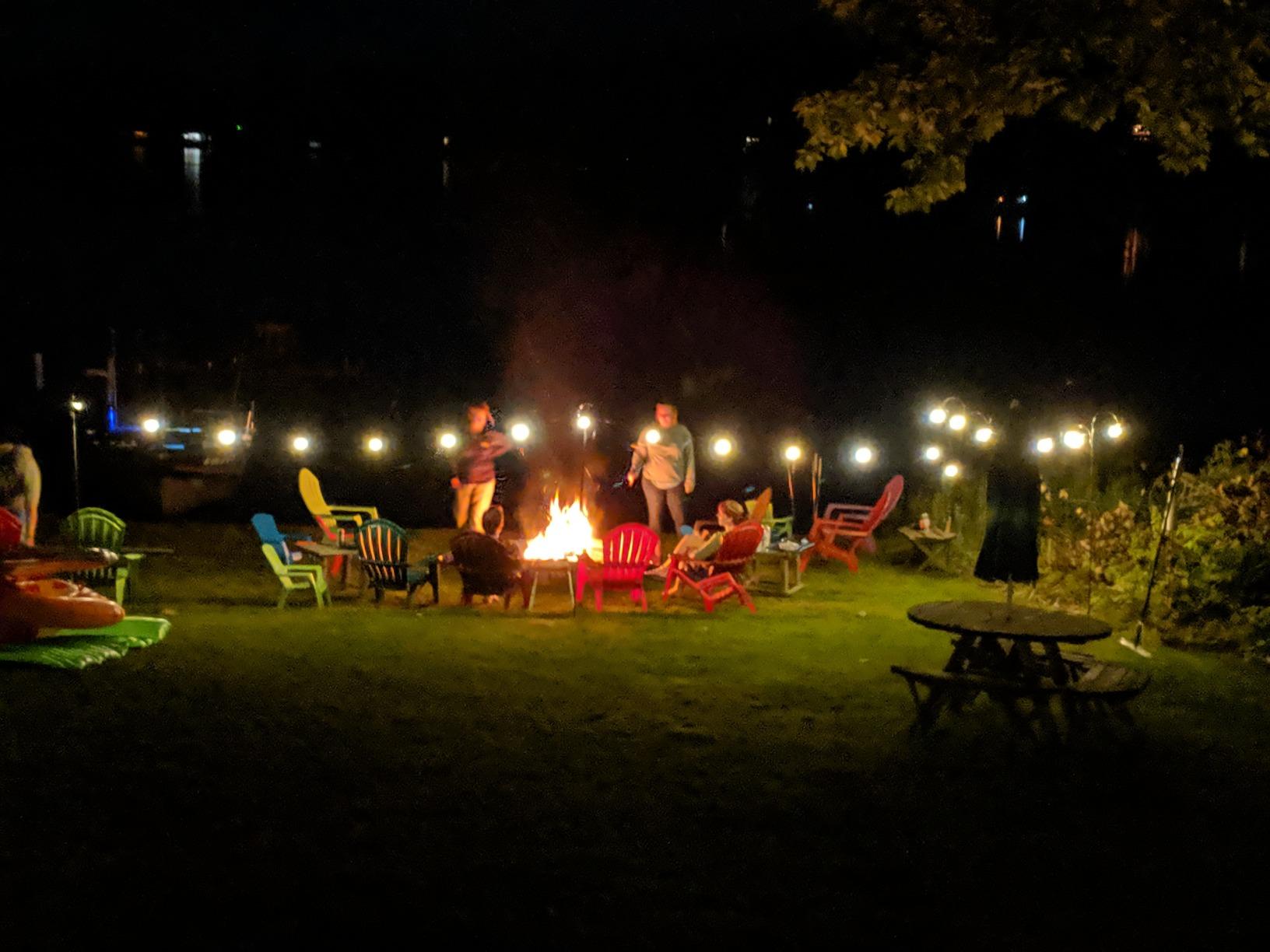 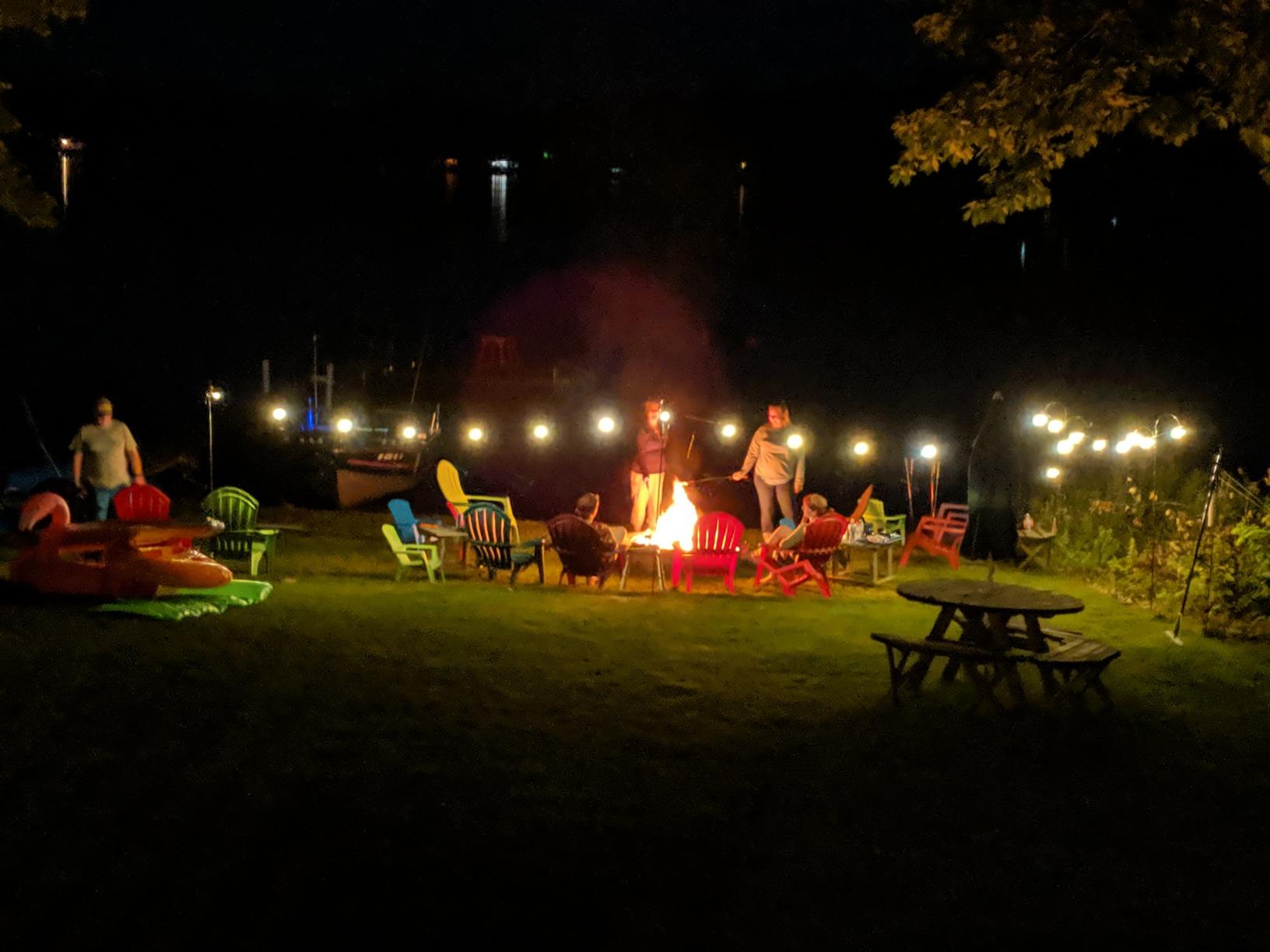 Is this helpful?
Dave D.
I bought this unit intending to use it for short car camping trips. This is a REALLY nice solar generator with great build quality and a solid set of outputs. I appreciate the LCD Display that indicates input and output wattage. The unit itself is super small and light. It's also quite durable feeling with a hard plastic shell. The little flashlight is surprisingly handy!The battery charges quickly from the wall or a 12V car adapter. From a Solar panel it's slower but still good enough if you leave it out all day while your on an adventure. The battery has enough capacity to charge my Razer Blade 15 laptop twice, cell phone multiple times, camera batteries, Mavic Air Batteries, headphones, and still have enough left to run a small USB powered fan all night for sleeping.The only thing you need to know is that this unit does not support pass-through charging. Meaning, it cannot be charged while using the outputs simultaneously. The DC output will simply disable itself if you plug in a power source. The USB and AC inverter both work like this but Jackery states that using this unit in pass-through mode can damage the battery and doesn't recommend it.Overall its an awesome compact power source for energy efficient campers. Hard to beat in this price range! 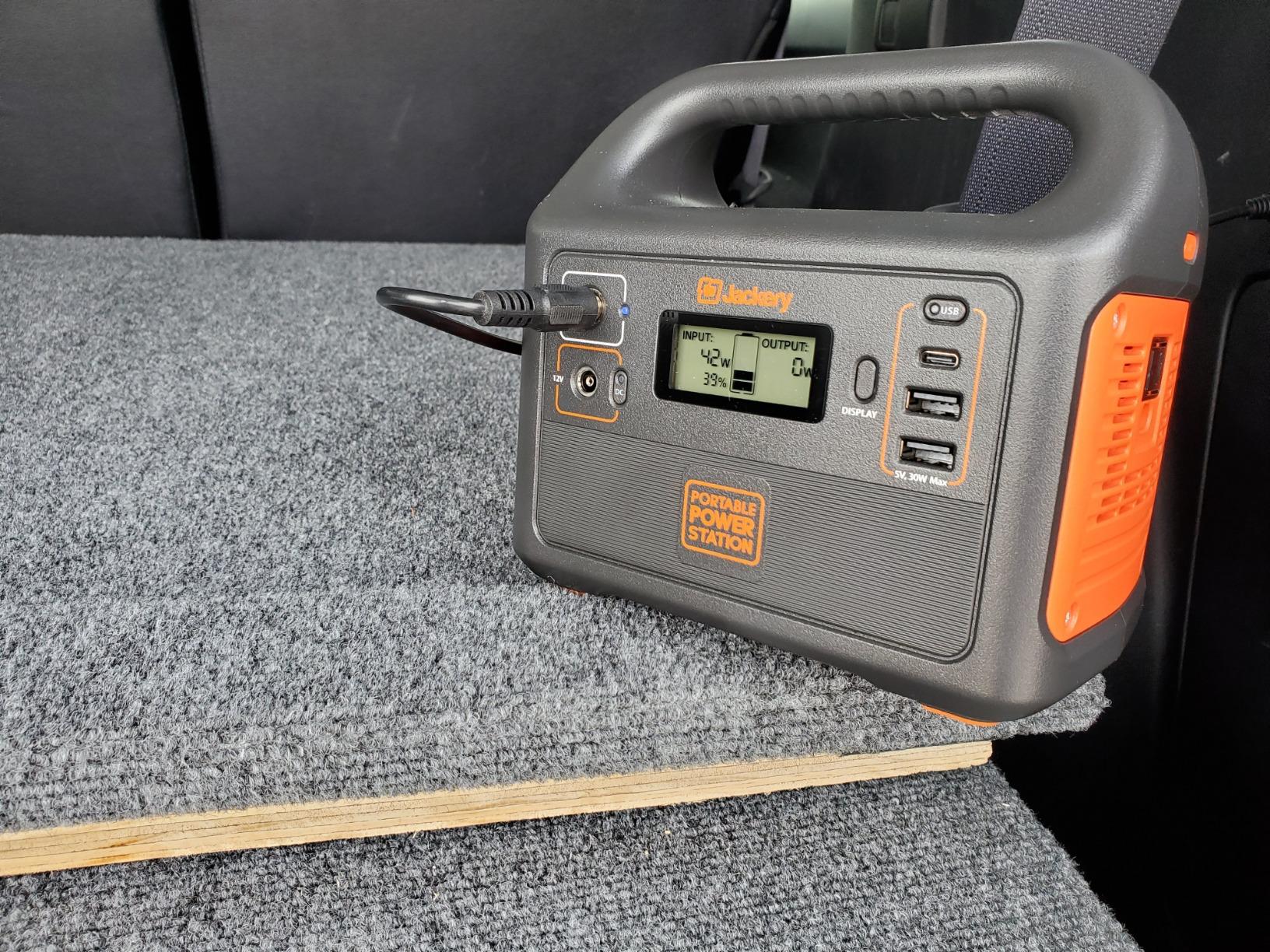 Is this helpful?
J. Bertaut
I have owned the Jackery Powerpro 500 for almost a year and have been very pleased with it. With that in mind, i decided to try Jackery's smaller offering, in hopes that it would be as handy. Below are a few tests I ran to determine its usefulness:Charge test for Apple MacBook Pro 2014 model.MacBook was charged to 54%. I plugged it into Explorer via the outlet. Turned off the MacBook and output hovered around 60-68w. After a few minutes it went down to 55w and stayed there while charging. The Explorer has a low fan sound while charging via the plug.After charging for one hour and 20 mins the MacBook was charged to 100% and the Jackery was at 63%.Fan Test:Whirlwind LASKO on med was drawing 40-45w so I estimate it would last about 3 hours. During this test I also plugged in my iphone to the USB and it charged it as well, it didn’t affect the output wattage much. The wattage output with my ipad, iphone and the fan hovered around 56-57 watts, while watching a movie on my ipad.Drone charge test.Using my Fstop Labs Rapid Parallel Battery Charger for DJI Spark, 6 in 1 Intelligent Charging Hub I was able to charge my Spark battery within an hour.Just to try:I attempted to charge all three batteries and my remote at the same time. Output quickly jumped to 77w, so I knew I wouldn’t get very far, but it held charging all four items. and after 30 mins the Jackery was down to 70%. After an hour it had charged the 3 batteries to 75% and the remote to full.iPad Test:The 160 did well charging two ipads while they were being used. Output was 8wResults:The Jackery 160 is a super portable and handy device, it adequately can be used a drone, laptop, phone charging solution while on the go. 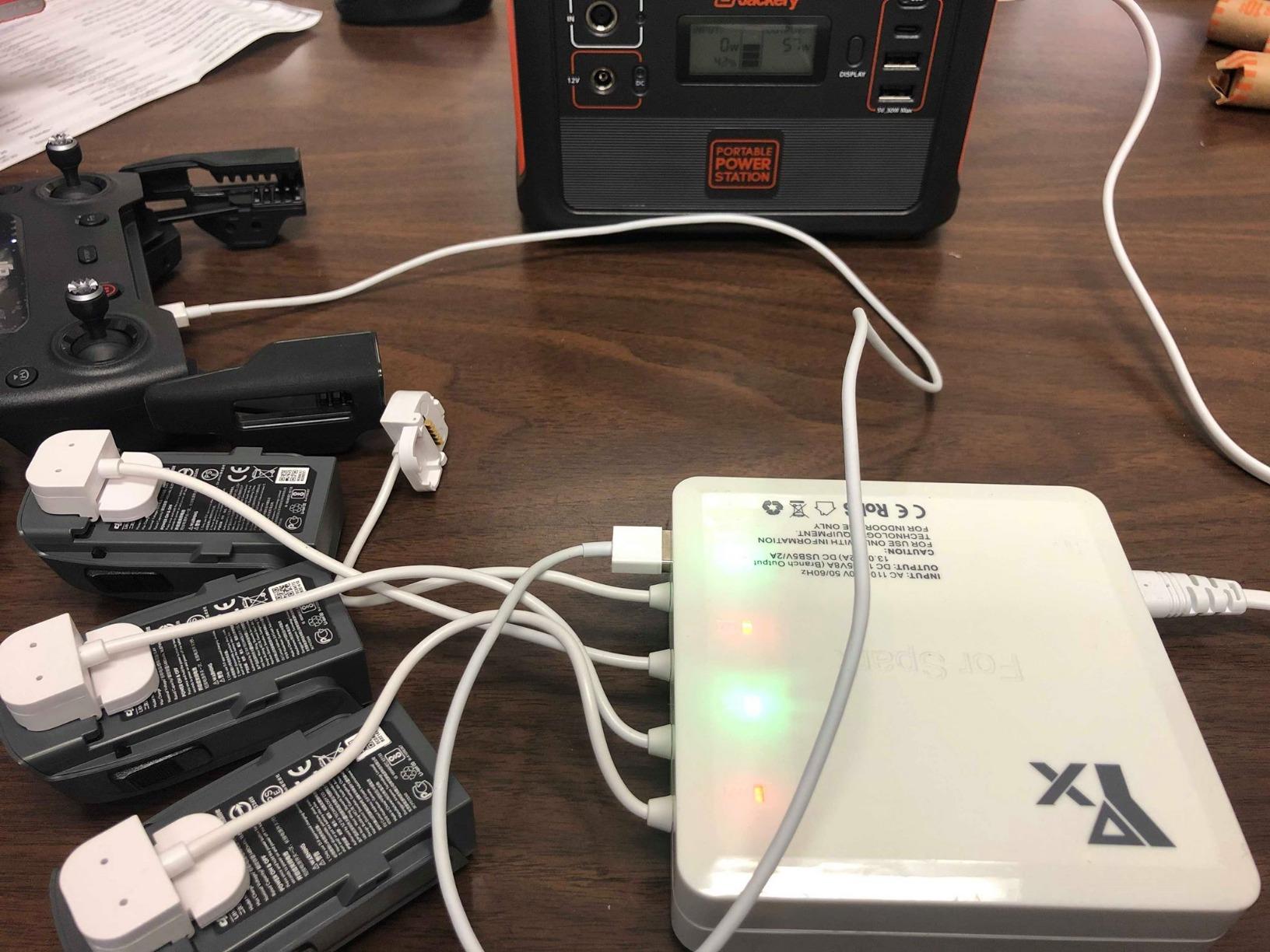 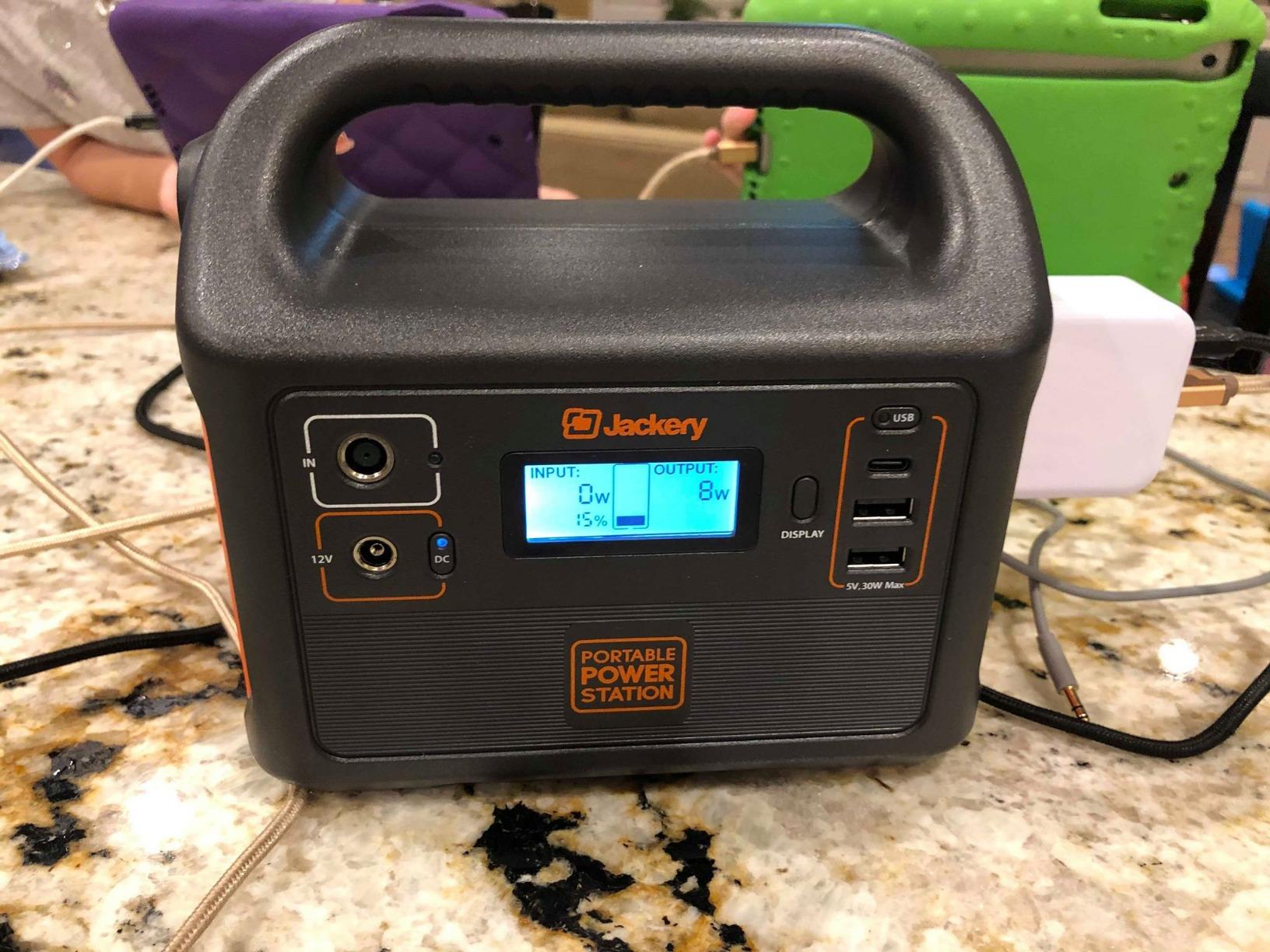 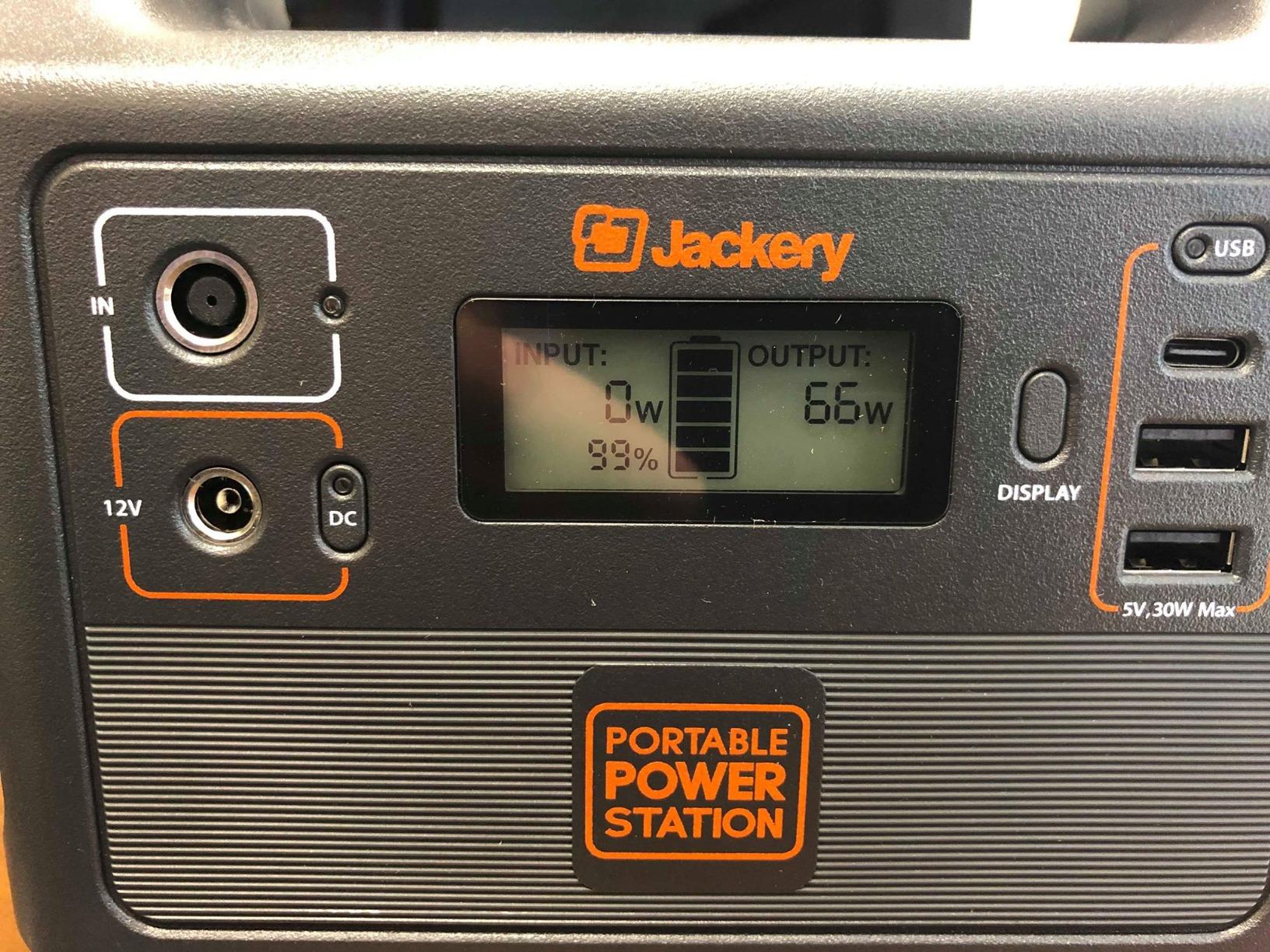 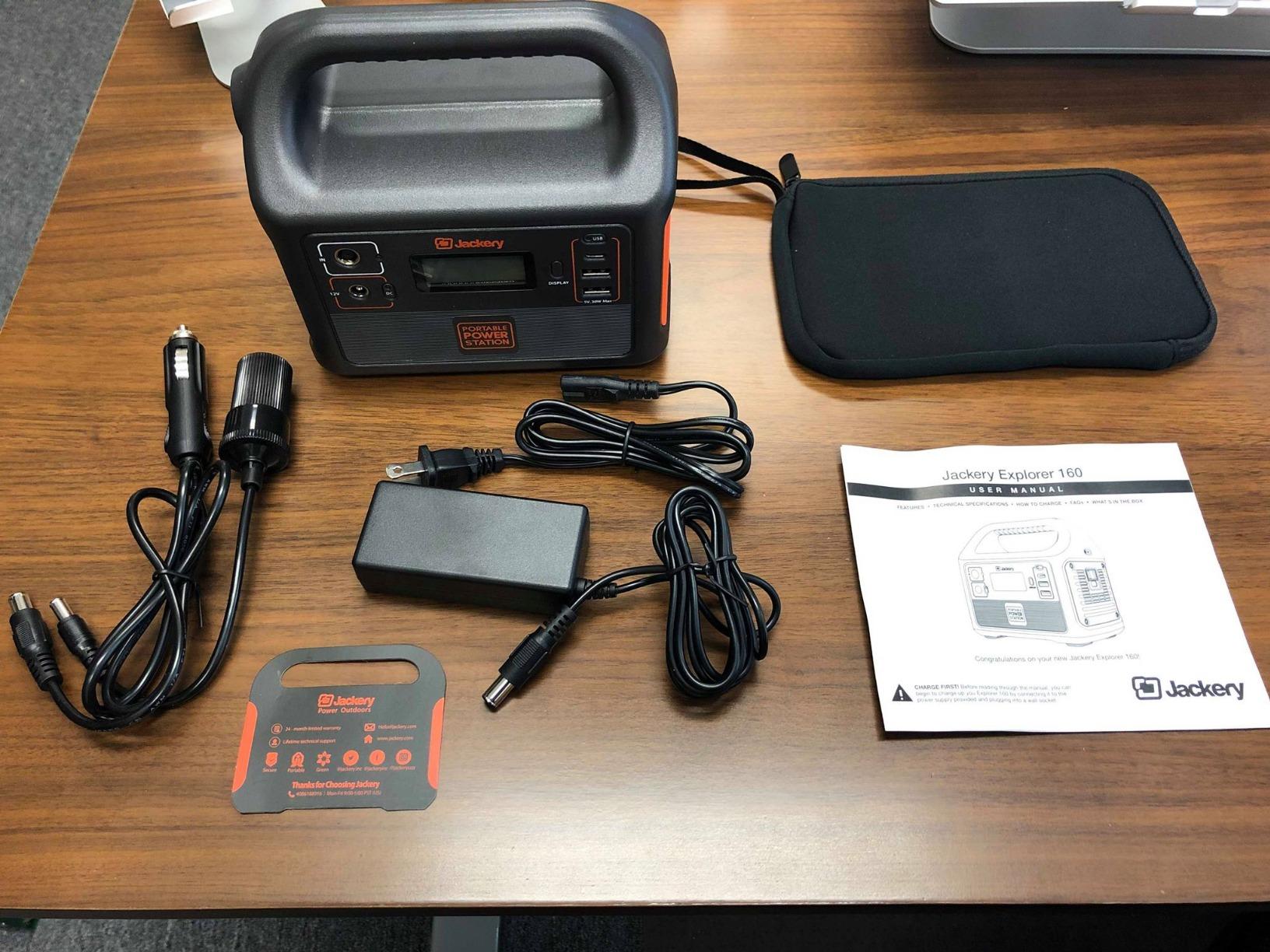 Is this helpful?
Renbutsu
First impressions. Weighs 3bs 15oz, just under 4lbs, love the size and build of the 160 Power Station. About cube-like size, 7" long x 4 3/4" wide x 6 3/4" high including the handle.Included with the unit are a DC to car adapter cable, Car Adapter charger, AC Charger wart and separate detachable AC cable, User manual, and zipper pouch.This 160 is the only Power Station of Jackery that has the USB C port. My 6P charges at over 2.4A when the battery gets low, so pretty fast for a phone with charging issues. USB A charges at standard rate of 1.4A for my phone, typical of what I see with other USB A chargers.AC recharges the 160 at 42W. If the user is charging their devices, the screen will show wattage input minus wattage output. For example, if I am charging the Jackery and at the same time, I am charging my phone at 13W, the display will show 29W in (42W-13W=29W). I think that's pretty neat feature.Digital screen - lit, user can press the display button to have it light up for 13 secs for easier viewing.Led light is very efficient, no drop in percentage on the display with over 3 hrs constant ON. Station feels cool, fan did not come on, Station did not get warm.120v outlet has slot for ground so plugs with ground can also be inserted, no need for an adapter to convert to 2 prong. The 160 can handle up to 100W constant and has a 150W rating for surge.Anytime the user switches on the AC outlet, the fan automatically comes on. This is regardless of how much draw your device pulls, even if it is off, even if nothing is plugged in. Fan is not loud, fairly quiet, but is constant ON, my guess is it is a feature for safety and keep the 160 from overheating. The fan will also use 3W once button is switched on. If you are one to be bothered by fan noise, it's a good idea to position the Station either further away or at the very least with the fan facing away from you.I find the zippered pouch a little too small/tight for packing all the accessories in it. The pouch fits all the accessories easily and will fit in the separate charging wart and charging cable, but that's dependant on how neatly one wraps up the cables and such. Would have liked to see a larger pouch.While I do not camp much, I still find this 160 very useful when we're out and about. It's small and light enough, plus strong enough capacity that friends and family can all either utilize it's charging capacity for their each individual device, whether a toy, notebook, tablet, phone, etc. Also, I love having this small unit to keep small pumps running for example on my fish tanks during power outtages. I have used this to charge up and run my 14" notebook off it. Even charged up and ran a large 17" gaming notebook. While I haven't tested the 17" notebook running a game, general usage appears fine. YMMV depending on device/model, of course.I would have loved to see some sort of jump starter inclusion but this is too small of a unit. Perhaps on a future or larger Jackery Power Station. I would definitely buy one so I don't have to carry this and a lithium battery jump starter in my vehicle. Jackery, paying attention?Note, this smaller unit does NOT have pure sine wave so if anyone is looking for the pure sine wave, you will have to go with the next larger Jackery Power Station. Jackery's 240 and the 500 both have pure sine wave. The 240 is twice the weight so for camping and outdoor traveling use, that is something to consider. This 160 is the only one that has the newer USB C port, I don't see USB C on the 240 and 500 units.Finally, Jackery is very quick and helpful when I tested and contacted them with questions and for information. This is very important because I base my purchases not purely on price, but pre-sale and post-sale support as well.UPDATE: Oct 8 2018, strangely I have found myself using this more at home than charging my devices with an AC plug. Never would have thought that I enjoy using this. I find it is so convenient moving to where ever I want, for examples, different room, basement, garage, workshop and just charge and use my devices. Also, checking the display show exact draw and battery "life" left, is almost addictive to me.
Is this helpful?
TOBIAS DILLARD
After the Hurricane, I needed something reliable to get me through the night until I could start my big generator up. Power typically goes out at night. This generator did not disappoint. Fully charged in less than 1 hour. Plugged my CPAP into it at midnight and woke up at 6 AM with 33% power still remaining! This thing is light, portable, can be charged in your car's cigarette lighter port or USB port. I can't believe I hit the jackpot. I've been using computer back-ups for years and they lose power quickly, beep every second they are off of regular power and are of no use. This generator solved all those problems.
Is this helpful?
TriciaCK
We got this power station to prepare for Hurricane Florence so we could charge our phones and run my CPAP if our power went out for a few days. It worked really well, and I'm so glad we got it. Jackery also sent me a complimentary portable power bank once they saw I live in eastern NC and would be in the path of the storm (though that didn't affect the content of this review). Very thoughtful company, and a great product.
Is this helpful?