Thanks for your review! it will be published soon. Thank you! your review was submitted
Bumblebee
I'm no matcha connoisseur by any means, but I've tried many, both ceremonial and culinary grades, and this is my go-to. I haven't bought any other brands for several years. The color is bright green, unlike any other culinary matcha I've seen (all an unappetizing muddy gray-green). To my relatively uneducated palate the flavor matches many ceremonials; it doesn't have the typical culinary matcha dried grass or hay taste. For the price, this is the one. And it's organic.One reason I rarely splurge on ceremonial grade is that I don't do the traditional drink (simply matcha powder whisked into hot water). Instead, every morning I blend up my antioxidant, anti-inflammatory matcha "latte": 1 tsp Kenko culinary grade matcha powder, 1 tsp powdered turmeric, a few grinds of black pepper, 1 Tbsp unrefined cold-pressed coconut oil, and 1 scoop Vital Proteins Collagen Peptides in a big mugful (~16 oz) of boiled, slightly cooled spring water (blend the first ingredients on high speed 15 secs, then add the collagen powder and blend on lowest speed 5 secs or stir in with a spoon). For even more immunity-boosting power, I sometimes add other spices like ginger, cinnamon, cayenne pepper. The drink is creamy, warming, soothing, and delicious, and it keeps me going until a late breakfast or even lunch. Feels like I'm doing something really good for my body! I'm pretty much addicted at this point.
Is this helpful?
Cyndal E.
I'm not a tea drinker, but I wanted to try Matcha tea for the health benefits. I tried culinary grade first because it was less expensive. Yup, didn't like it! So, after hemming and hawing, I ordered this ceremonial grade tea based upon its reviews. I think they nailed it. I like this tea because it is more mildly flavored and doesn't have clumps at the bottom of my cup when I get there. I find it quite tolerable and suspect I may even grow to like it over time. Anyway, I'm happy to have a Matcha tea that I don't have to force myself to drink!
Is this helpful?
Mary L.
The photos speak for itself. On the left is Kenko Matcha and on the right is Jade Leaf Matcha. Based on color, the winner goes to Kenko Matcha! However, in my opinion, both are excellent. There is a slight difference in texture- Kenko requires a bit more mixing because the powder is more compacted. I would recommend sifting the powder prior to adding liquid. Whereas, the Jade Leaf Matcha mixes easily without any clumps. Both taste the exact same if made into a latte. On its own, there is a difference but I'm no professional. I couldn't describe the difference even if I tried.... Lol! However, there is a slight difference in price between the two.Update- I'm going back to my original choice... Jade Leaf Matcha! The biggest and most annoying difference is that I have to sift the matcha powder before adding liquid. And even after that, I still have find tiny clumps in my drink. I've never had this problem using Jade Leaf Matcha. Going back!!

Is this helpful?
Ben Suwarato
We got the ceremonial grade and the culinary grade, both have the same benefits however the more expensive is from younger leaves which require more delecate processing so I've read and the culinary grade is also great but from more mature leaves plus grown in more shade too. I like ceremonial as is plain but the other is more bitter tasting yet still good, we made a latte using the cooking grade and almond vanilla milk, sooo delicious! Add some sugar or safe sugar substitute though to make it sweeter. My next project is to make a Swiss cake roll out of the cooking Matcha. I also had a bad sinus infection and started feeling better after just a couple days of having this as it can boost your immune system, mine needed the help. The taste can take some getting use to for many but we find it to be amazing. 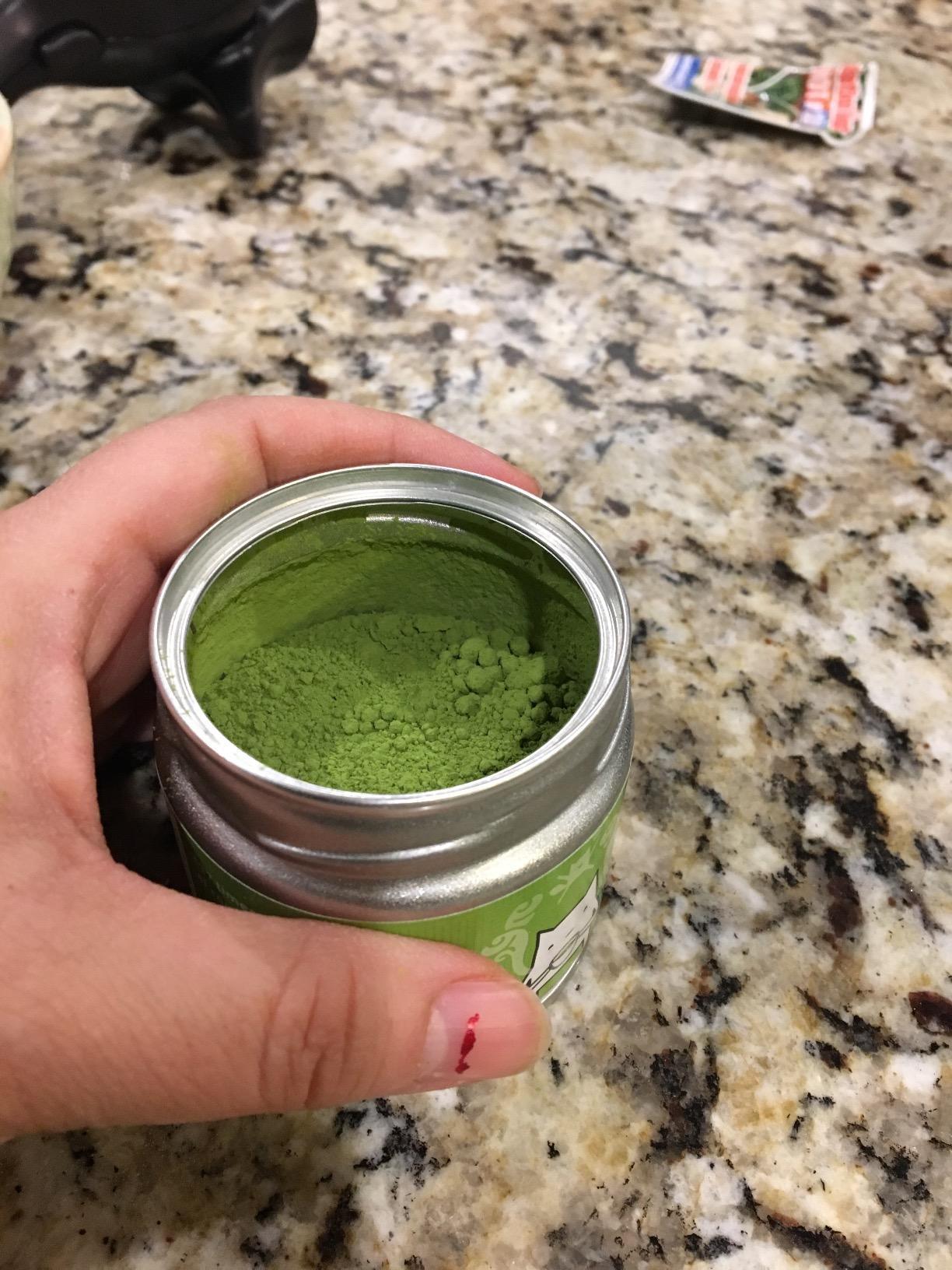 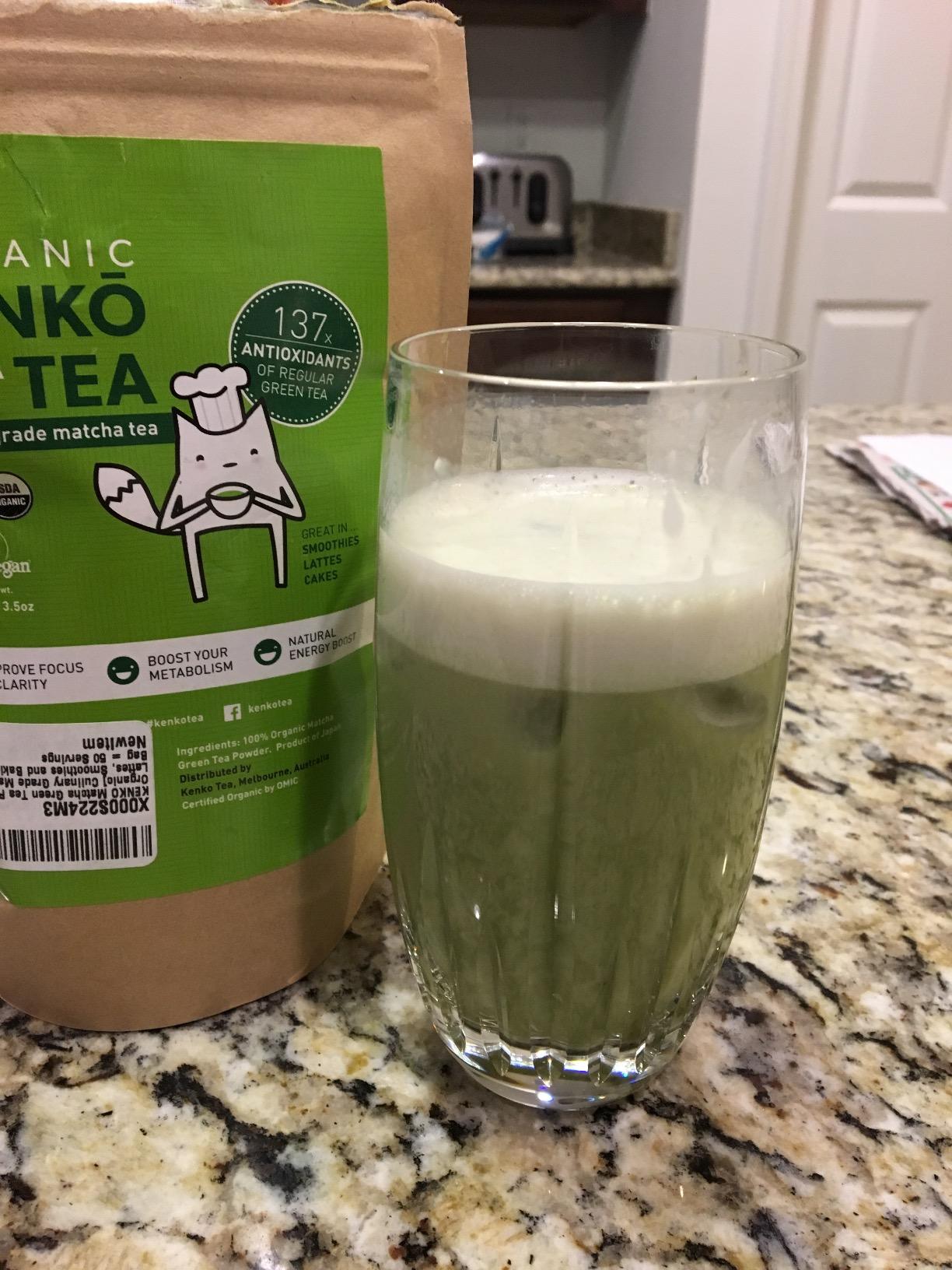 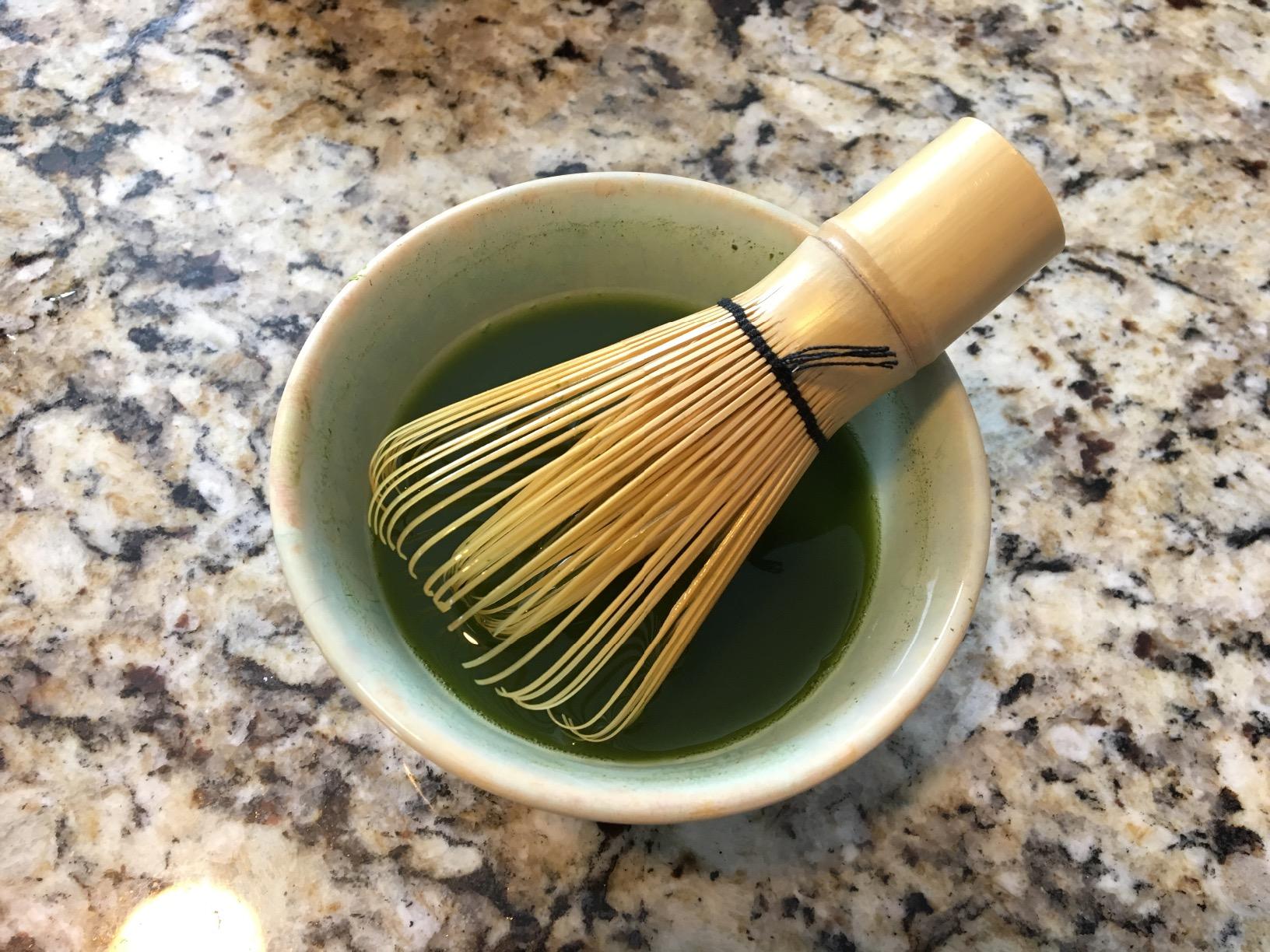 Is this helpful?
Bookbabe23
I don't like matcha. There. I said it. But I like the idea of being a person who likes matcha. Also- all those health benefits in just a half of teaspoon?!?! So, I drink it. Then someone told me the quality of matcha makes all the difference. So I coughed up the cash and purchased this ceremonial grade powder. Turns out I do like matcha... just the really expensive kind. Also, having it arrive in the MOST endearing tin helped. The follow upEmail sent by the company was perfect and included a helpful PDF. Good experience all around.
Is this helpful?
Quartz Cat
I gotta be honest with you, when they first sent this to me, I had to double check to see if they sent me ceremonial grade instead!I've been a customer of Teavanna and David's TEA ceremonial grade matcha before, and I'm being serious when I say that the culinary grade of Kenko Tea is quite similair to the ceremonial grade of Teavanna and David's Tea. It's more potent, though, as is expected with culinary grade. But boy, is this smooth and creamy matcha, just as much as the ceremonial grades I've gotten from the aforementioned companies in the past. The color is beautiful and vibrant, as well. I have read in some people's review they are having issuers with clumping and moisture? That wasn't my experience at all. For me, the matcha stayed fresh and crisp through out. It also mixed in perfectly with shakes with my blender. In the past, I've had grainyness from the other culinary grade matcha I've tried.Overrall, if you are looking for a creamy and smooth matcha that has more potent flavor than ceremonial matcha's but is very similair in many ways, I'd highly suggest this. Not only is the taste amazing, but the customer service from what this page shows is responsive and involved, which I appreciate!This is my go-to matcha from now on, without a doubt.
Is this helpful?
Tom O'Brien
Best of the best. Contacted the company and the owner himself replied. I'd asked if it was third-party tested for radiation. Not only is it tested for radiation, but for lead as well. Plus, it's tested at all stages of shipping, from source to the US, in three different locations. In addition, it's truly Japanese matcha, which is the only kind you want. Finally, it's got a gorgeous green color to it, the trademark of quality matcha. Pricey, but worth it.
Is this helpful?
Shawn of the Dead
This is my first venture into the world matcha tea. After a lot of research, reading reviews, and checking prices, I decided on KENKO. The tea arrived quickly and in the advertised package. I opened it up and smelled it, the tea smelled fresh and grassy.I have learned that a little goes a long way. Currently I use 1/4 - 1/2 tsp per 8-10 oz of water and it is perfect. I have used this tea in several different ways, including hot tea, iced tea, latte, and in a panna cotta. They all have been wonderful and the wife an I often enjoy a hot cup of matcha with honey.As others have mentioned, I can "feel" the caffeine but can't explain it. With coffee, I sometimes feel hyper and jittery and experience a crash, with this tea I don't feel any of that.The way I mix my tea is in a blender bottle although any bottle would probably work. I did place the powder into a glass container for easy access.I would buy this product again. 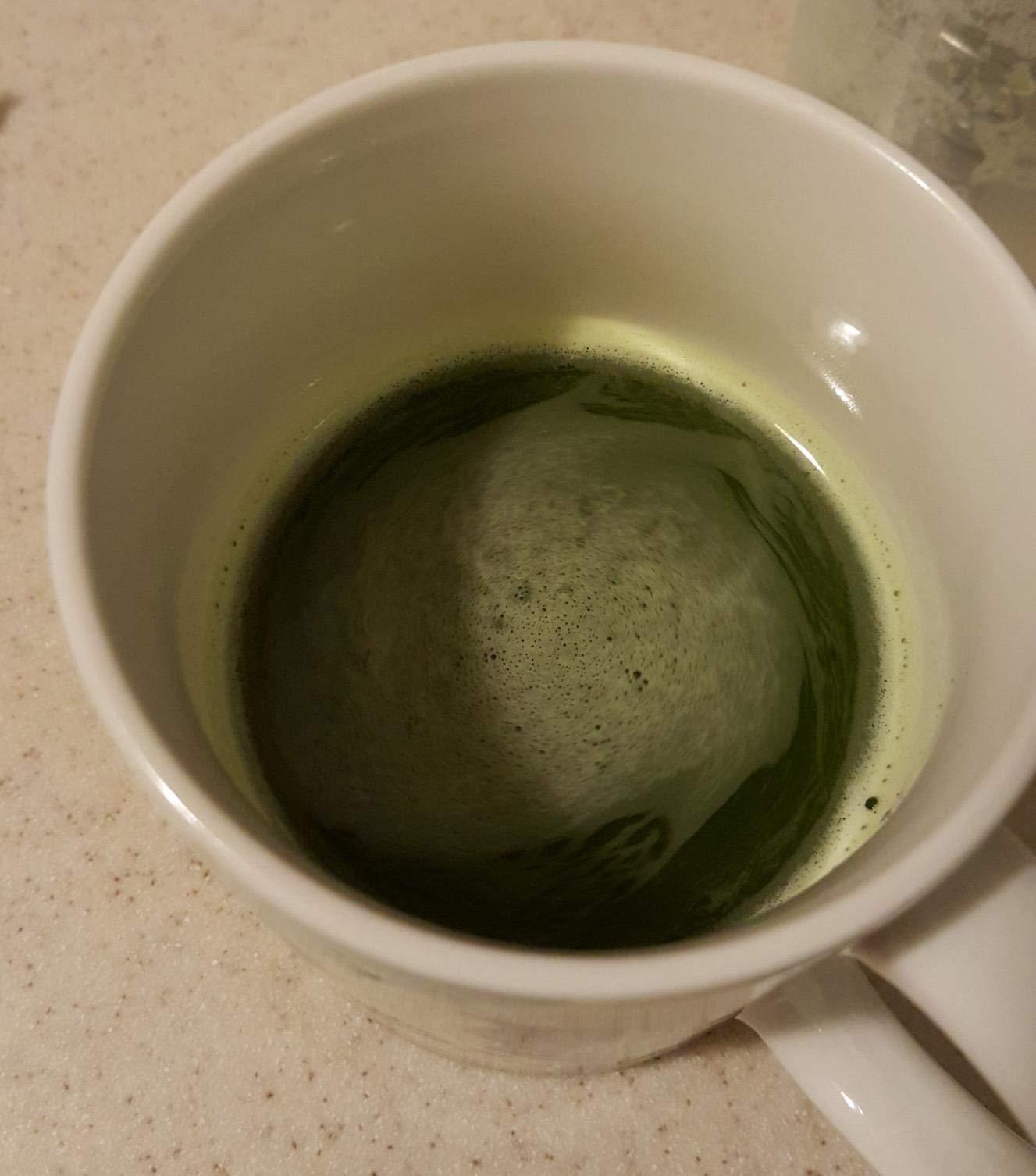 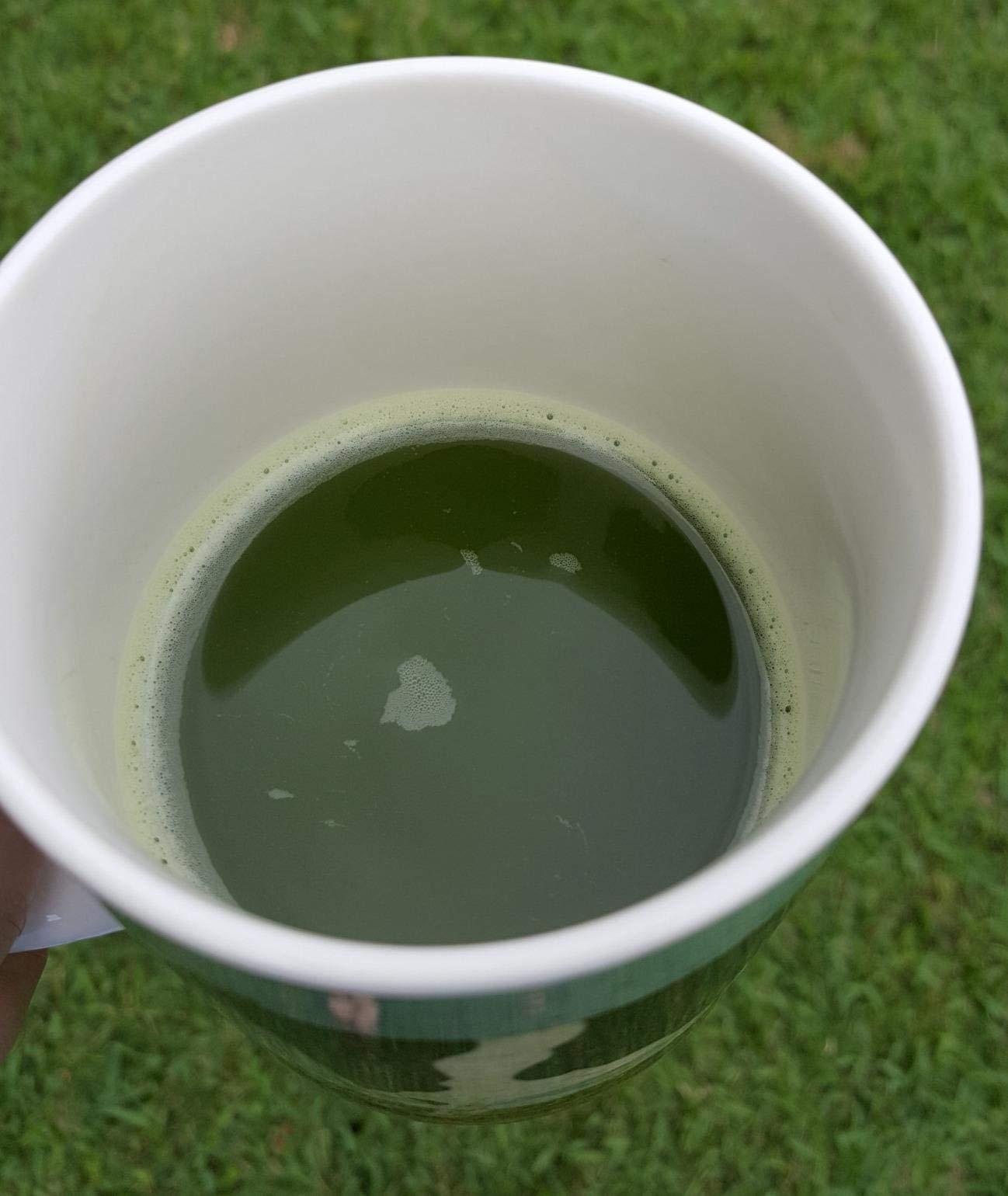