Thanks for your review! it will be published soon. Thank you! your review was submitted
Aevi
I hesitated on getting a diva cup for a loooong time. What’s the holdup? I was scared of:-insertion/removal-blood in a cup-cleaning out a menstrual cup anywhere but homeFirst, insertion/removal is SO MUCH EASIER WHEN YOU KNOW THE TRICKS!- Inserting:1. The instructions come with two modes of insertion. The first is the normal one you see, and the second has been my go-to. (See picture for reference.) You place your finger on the edge of the cup and push it down towards the center of the cup, this creates a triangular shape. Now, the top of the cup is the size of a tampon, and it’s far easier to insert. I also think it makes it easier for the cup to unfold correctly when placed.2. Don't worry so much about the shape of your vagina- if you have inserted a tampon, you’ve got the idea. Same goes for relaxing your vagina muscles- I never focused on it, and it never became a problem.3. Checking if the cup is fully expanded is hella hard for me. I twist it as much as I can, then I usually give up. You can feel when the cup expands just from the base, and this has been enough for me to tell. I haven’t had a single problem with leaks.- Removal: now this was interesting. My first removal felt like I was giving birth to a lime sized baby. The suction truly does exist. By fear not! As soon as I figured out the right way to do it, it was smooth sailing on USS Menstrual Cup. The trick? Push it out. Literally. The first time I tried to remove the cup, I thought I had forever lost it to the seas of the female body. The moment I discovered I could push it out, the stem would beautifully present itself without any trouble. Wow! You’ll still want to pinch the cup to break the seal, but that’s the easy part. Getting the thing within pinching distance was a really simple but for whatever reason completely unintuitive thing to me *facepalm*.-Blood in a cup sucks. You’d be amazed at how unappealing it looks. Prepare yourself. If you’re queasy, this might be a struggle for you.- Where/when?? Every 12 hours is SOOO NICE! Trust me, you’re usually home within 12 hours. If you’re not, find a private bathroom, take it out, rinse it off, stick it back in. One reviewer mentioned she does this in the shower at night- genius.Overall, this has been really exciting! Pads suck! Tampons turn your precious ecosystem into a desert! The diva cup isn’t perfect, but it’s the best menstrual product I have ever tried.*I would not recommend this product to someone who isn’t ready to go digging in their vagina quite yet. 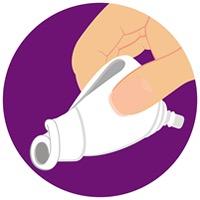