Thanks for your review! it will be published soon. Thank you! your review was submitted
Ken T.
I've had it for about 2 weeks and I love it. It's highly accurate in terms of measuring wattage. It'll pick up an iPad tunring on when it's plugged in, about 6 watts. When I turn on lights, the increase is very close to what I expect. Solar measurements are nearly identical to what is displayed one my dual inverters, within 3-6 watts (of as much as 10,000) and that's compared to a display on the inverters that changes constantly.Some people complain about the device identification. In 2 weeks, it's found 8 devices and pretty accurate in the identification. If the label from Sense is wrong, you can easily change it. You also have to realize how identification works. It's just looking for electrical fingerprints which are not simple direct increases/decreases in power usage to be recorded. Many devices are a variation of power usage. I have a space heater that's is a stair climb of power usage when it's turned on. The coffee maker is on and off. A PC changes power usage with nearly every action, a file opening, a video playing, etc. When just monitoring line power, it's not going to identify all the devices in your home one for one, but if you want a great snapshot of your home's usage and solar production with a high degree of accuracy, you'll love this device.
Is this helpful?
Team V
I’m really impressed with the Sense Solar unit.First, the speed of the unit, it updates multiple times per second and gives you amazing granularity. You can instantly see even a tiny light bulb show up on the meter.Second, after some time, the unit is pretty good at detecting devices. Sometimes it’s a goose chase to find the specific light, fridge or fan that’s identified but it’s pretty easy to do because of the instant resolution on the meter. It does take quite a while for devices to show up and for the most part, only some major devices show up first (I think my coffee maker was first, then furnace blowers, then fridges, then my clothes dryer). My Tesla, TVs, computers, microwave and majority of lights have yet to be “sensed”, but I’m only a couple weeks in. Long story short, at first it’s just a super nice meter, overtime it morphs into a more usable tool. Don’t expect this to tell you everything though.Finally, the support is great. I’ve asked a lot of questions via support and get timely and thoughtful responses.This is a very premium product and well worth the price.For solar owners, I use this way more than my SolarEdge HD-Wave as the reporting is so darn fast and customizable (screenshot attached of a Winter afternoon with solar trimming down and a brief Tesla Charger (240@24A).

Is this helpful?
Eric
I absolutely love my Sense! I installed it myself included about 15 minutes and it’s working great so far. Detections take some time but once the Sense detects something its VERY accurate. If for some reason it’s not you can always edit the device after detection. You can’t add your own devices, which is a minor annoyance - but they very clearly explain why on their website. The LIVE data (seen in my screenshots) is AWESOME. It’s very cool to see power usage of every single device in my home. I would definitely recommend this to all my friends as a must have for any home. I have not used to solar portion of this so I can’t comment on that. Support is top notch and the product is very high quality. Make sure you have WiFi close to your electrical panel or you’ll need to get the WiFi antenna outside of the electrical panel to get good signal - I found this to be very easy since I just stuck the antenna out one of the holes in the electrical panel. The antenna is inside the wall, so it looks nice and clean. I am not an electrician, but I shut off my power and was extremely careful. Remember even if you shut off your mains those giant cables coming in are HOT. Ideally you should shut the power off at the meter which is very easy, just flip the breaker outside. But still, exercise extreme caution, or better yet, grab an electrician to help. It literally took 15 min or less to install so professional help will be cheap and worth it. Anyway, I love this thing, buy it now! There isn’t anything remotely like it on the market today.(I am NOT a paid reviewer, just an IT guy who loves smart home devices)

Is this helpful?
Mark A Mannarino
Easy Install, excellent instructions, great customer support. I've had it installed for just under 2 weeks and it has found nine devices. Of those 9, I have been able to positively identify 5. The other 4 I am having fun playing detective trying to identify, as all but one are low frequency and low watts. The one thing I am anxiously waiting for is for Sense to identify a few of my big ticket items, like my main house ducted 3-ton heat pump, my Rec room pair of 1-ton ductless heat pumps, and my swimming pool. All of these have variable frequency drives with soft start motors that probably make it difficult to detect as they ramp up slowly and change over time. I have also noticed that the Sense daily kWh estimate is usually within 1 kWh of the number I get from my utility provider, which convinces me Sense is pretty accurate. It has also told me that I have a pretty high "always on" kWh number, relative to what Sense reports as an average. 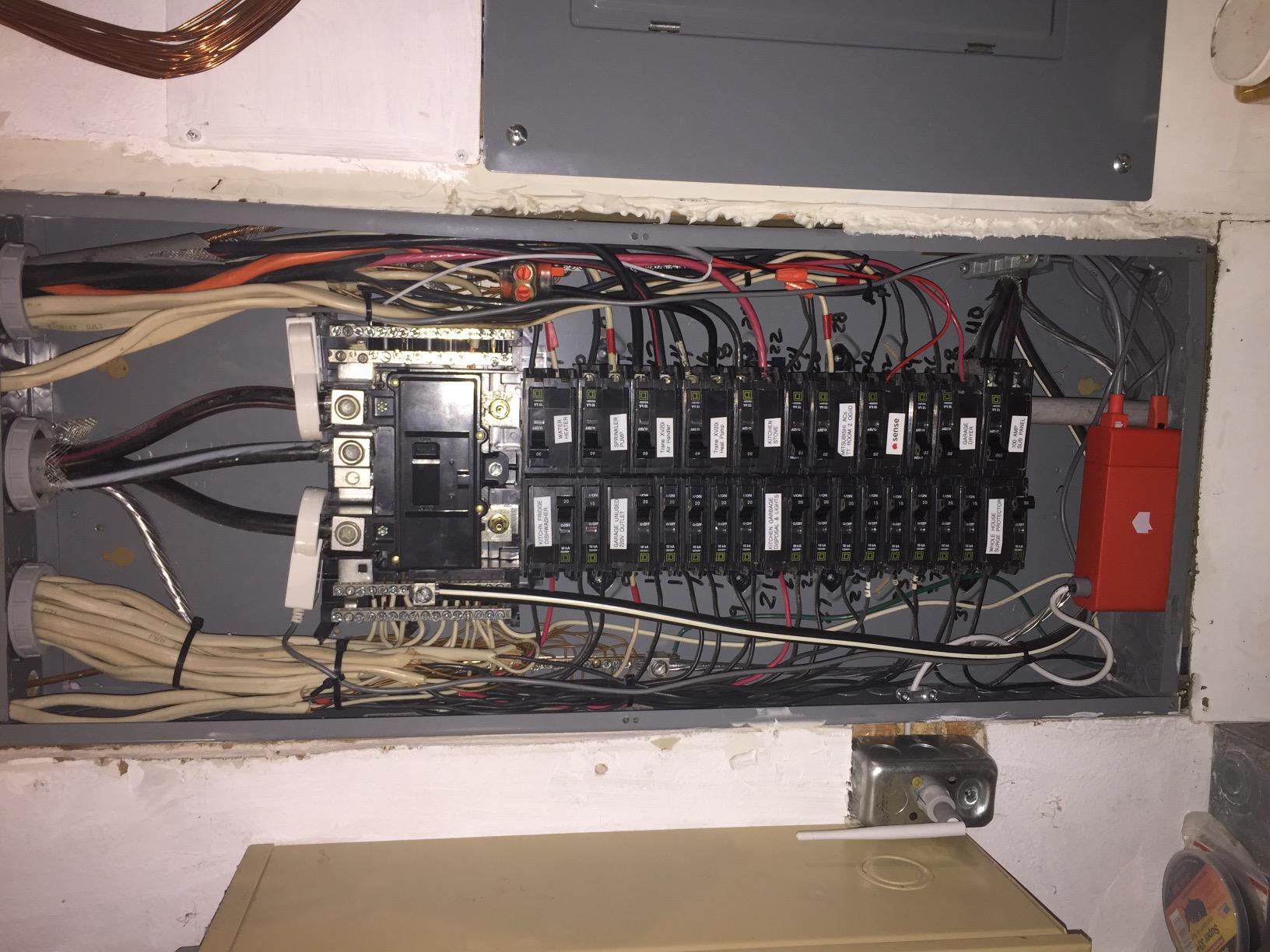 Is this helpful?
Taiwo E. Egun
I believed in this but was really hesitant in getting it until I couldn’t find out why my energy bill was so high. I went plugging in this kWh reader I had but it was a slow process. Decided to order it and it’s exactly what I thought. The technology used to recognize the watts used is great. The fact that it can recognize the change as soon as it happens and reports it goes a long way in understanding the inefficient appliances in your home. Whether it’s bulbs or old appliances it’ll measure it as precisely as anything out there.Once installed this thing will have you running around the house unplugging things just to see what you save. It’s an adventure honestly and you learn a lot about your appliances. You’re old stove? Uses about 3k watts to charge to high. Once it gets to the temp is when it shutters between 3k w and 500w or so. It’s incredible what you learn from these things, it’ll give you a better idea of what to look for in efficient tech. Your iron, heater or anything that creates heat uses pretty much the most energy. You’re fridge idles at 380 watts or so but turns up to 3k watts. This thing is great. Totally recommend it to anyone with the desire to learn about there appliances.Can’t wait for the bubbles to form. Heard it uses machine learning which is cool. 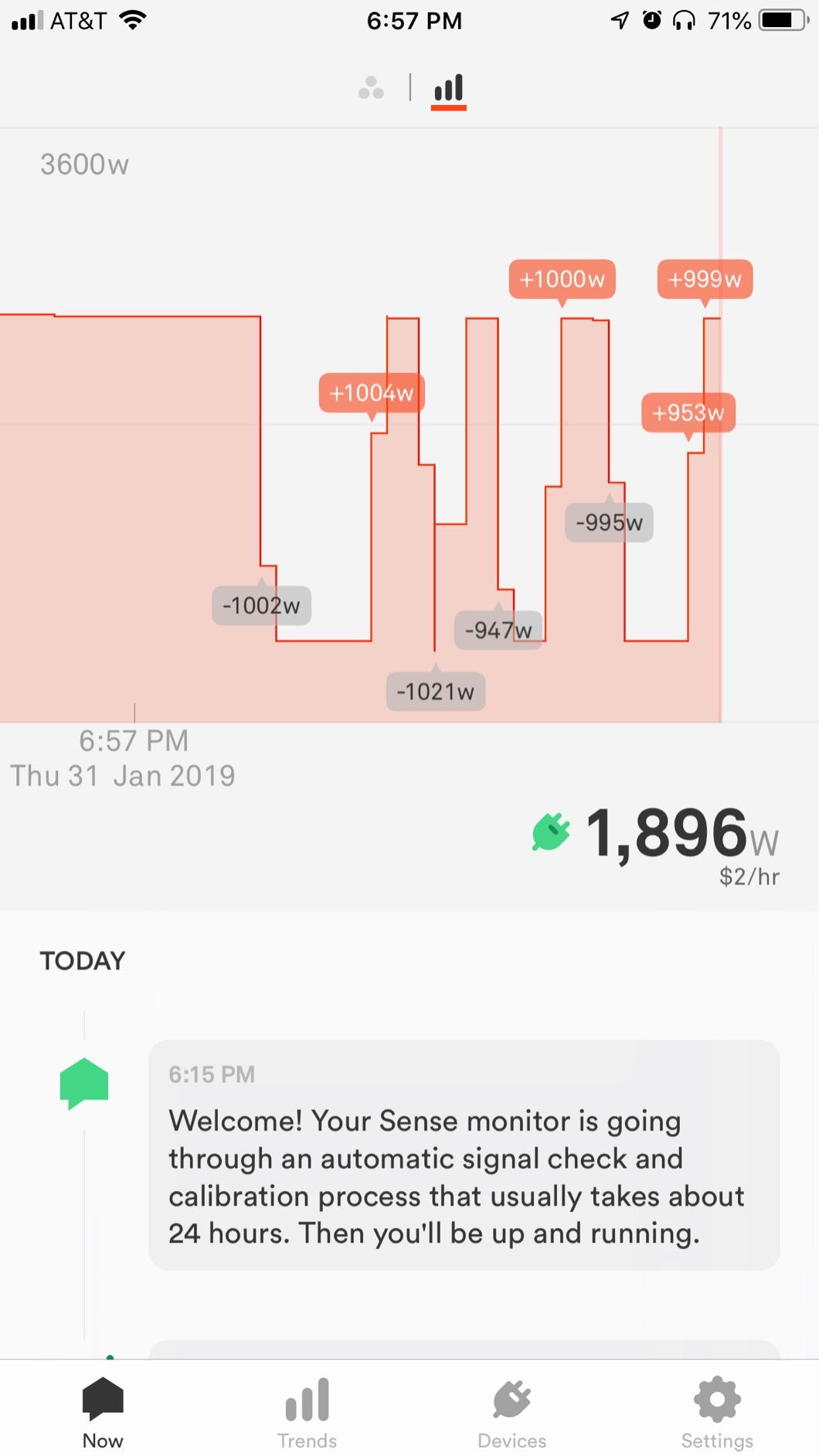 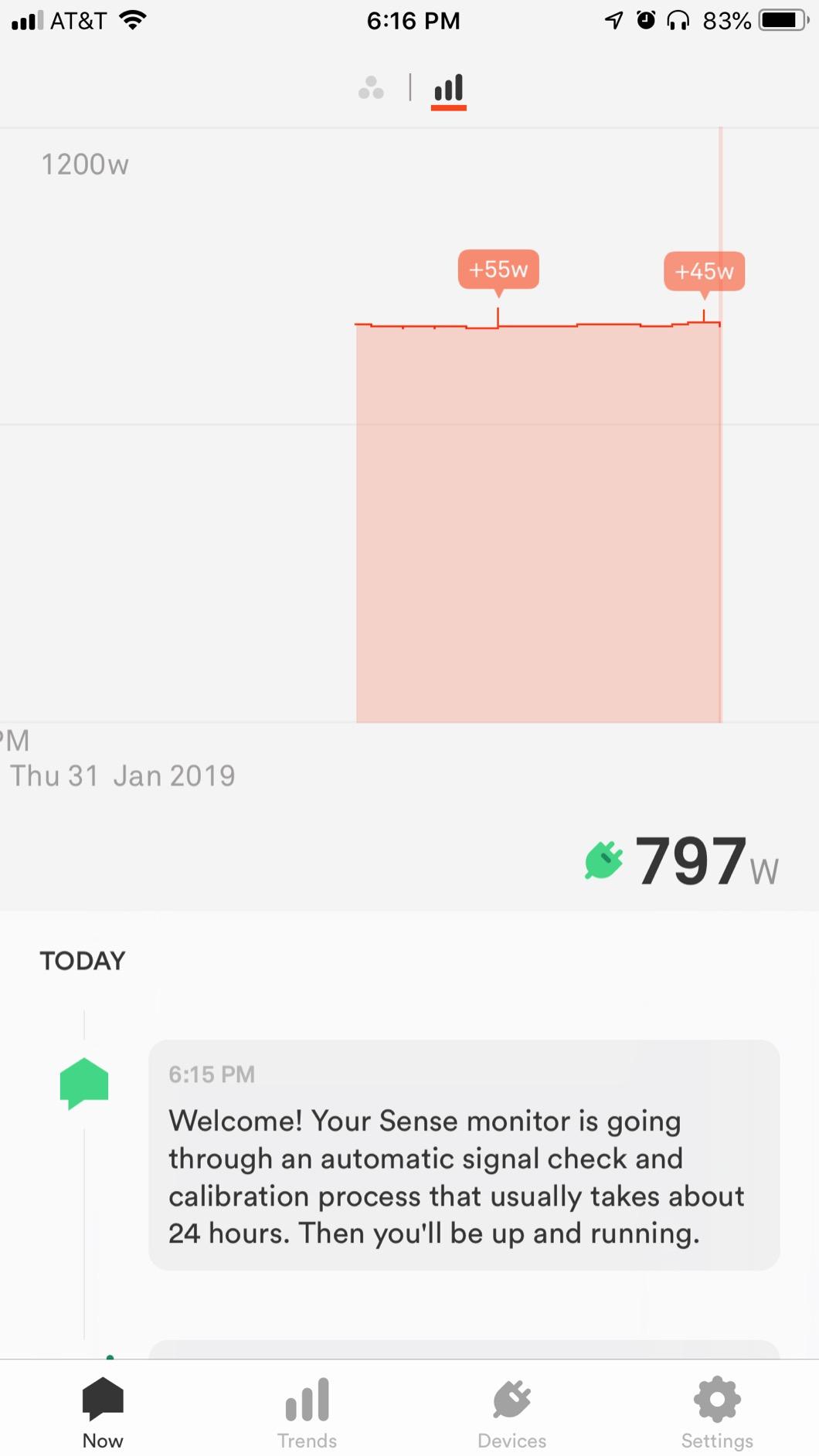 Is this helpful?
freak3dot
The following is my opinion based on my experiences. If I recall correctly, I saw this device on This Old House. I bought it because we are adding insulation to our home (all electric). I wanted to see the impact of the new insulation on electric use. This device filled the need.It also has some extra features that I've found useful. It detected our motion light. So I put a notification on the motion light so that I know when it comes on.I wish it had better integration with home automation systems. It does support IFTTT, but I want to keep my setup simply and inside my network if possible. Some of the competition has MQTT integration which would really meet my needs. If I did better research before buying, I would have probably bought something else.
Is this helpful?
Osberto Morales
It took me longer than expected to get the unit working only because I hooked it up wrong but with the help of tech support they were able to explain were I went wrong and after about a week after they helped me solve my wrong install, the unit started to identify the items at the house, I can track in real time what's on and for how long and it has been a great help to me to identify what's being used the most, after seeing the results first hand I highly recommend this for anyone who has an interest in tracking how you energy is being used 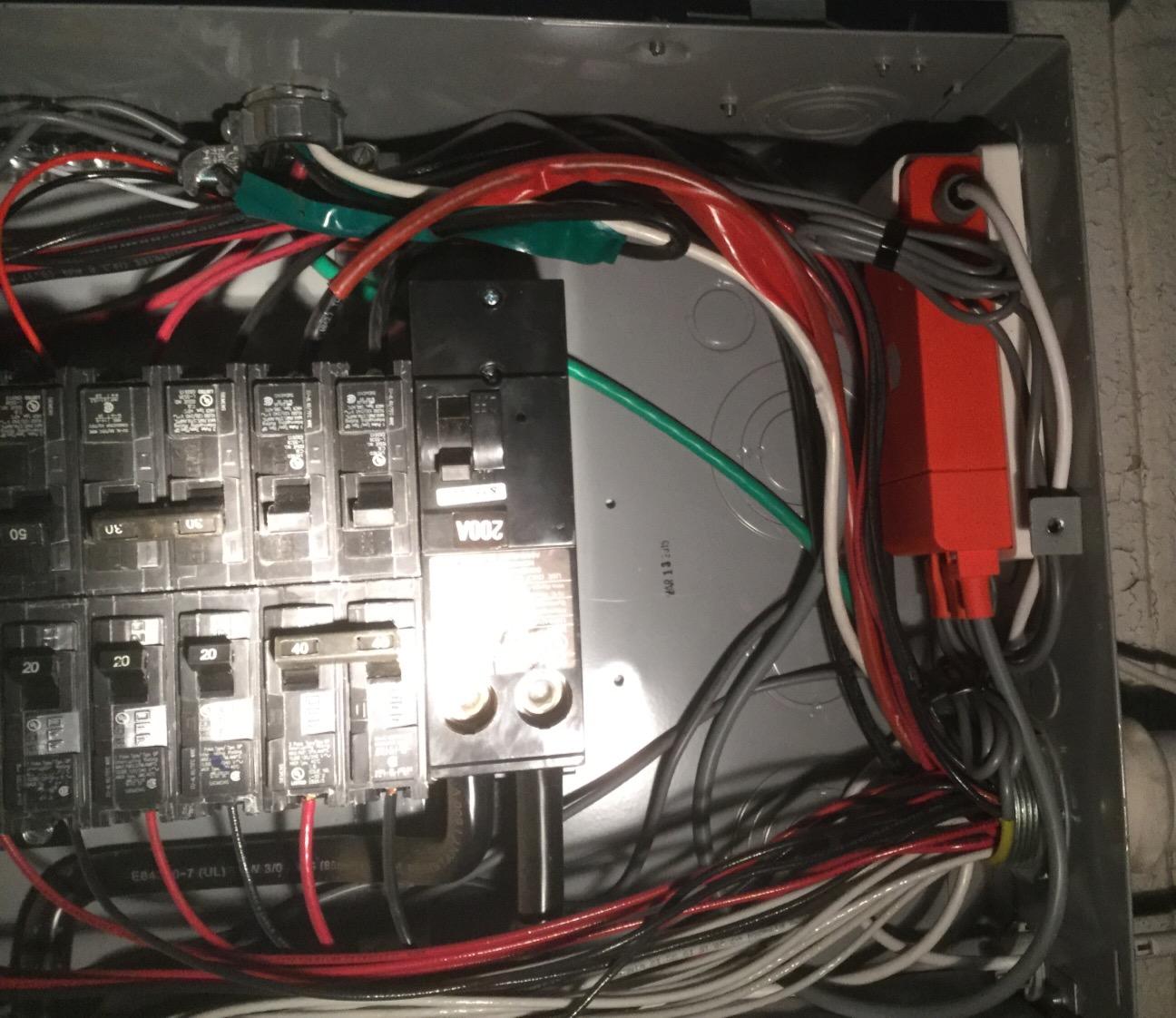 Is this helpful?
Joe Mango
Does it work? Yes! Is it perfect? No. But I've had several other power monitors/trackers and this is the best as of 12/17. They are working on more improvements and the ones giving bad stats on WiFi issues probably have real WiFi issues. I've had mine up for over 2 months without a hiccup. Its extremely accurate when compaired with my power companies bill and my solar side as well. Easy to install and easy to understand. With more users and work on the system by the Sense team I'm positive this can become the #1 energy monitor system.
Is this helpful?
John R
I have to admit that i was skeptical of this being that the monitoring of the solar production module by solar edge (inverter) was a lot more expensive. Ok now onto a review where everyone can understand. After about 2 weeks it found all the major electrical items, ac, fridge, freezer, washer, dryer. Again im not expecting for it to find every single thing that gets plugged in like an air purifier, since thats not an appliance every household has. but this metering is spot on. The solar production monitoring is spot on. The consumption is spot on. I love that when you turn on/off a simple light you see the energy consumption go up and down. this simple purchase has made us more aware of what we are doing . installation was a snap. I could of done it myself (but being my father in law is an electrician, use his free help). it took him no more then 5-10 minutes to install. its very simple to do honestly. thank you sense. this truly is an awesome product
Is this helpful?
Robert Hatfield
So far so good. Ordered this morning with free same day delivery. Install was a breese - bought a 20A 220 breaker at Home Depot and had it up and running in under 15 minutes.Amazing to watch real-time wattage useage: “Alexa, turn on the pool light” and the graph jumps ~600W, turn off and it drops 500W - it’s a 500W bulb. (See image).Will spend the next few weeks adjusting power and turning things on/off to get a feel for what’s consuming the most.The app says it needs up to 24 hours to calibrate and start to identify things. But so far, just seeing graphs of usage is a great feature.I may update this review after some time passes. 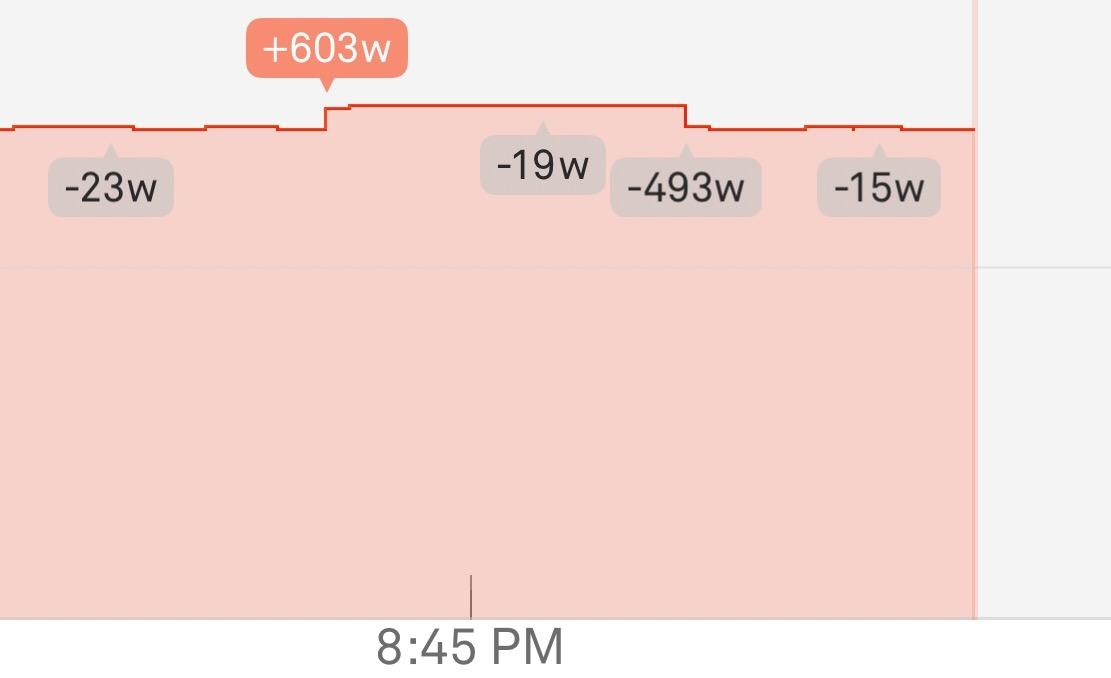