Thanks for your review! it will be published soon. Thank you! your review was submitted
Ed W
I purchased 4 of these a while back to replace other chargers. OMG I AM SO PLEASED.I used them tent camping, and they came in handy when my niece's family lost homes in CA wildfires.Pro's: lanyard connection point tough. hung on my pack hiking and thrown around never broke on any of the 4. 2nd: Large flashlight WILL BLIND YOU and light up and area really good. small one is prefect but I wish had a second button to turn them on. You have to hold button down long for small and double press rapidly for large.I keep forgetting and end up hitting large and blinding myself. 3RD pro: solar charging and capacity: I use them to charge MOTO G7 power phones as well as nebo flashlights.at least two full charges on phones off 1 charger. ( phones last for 3 days normal usage). truthfully I have never exhausted one yet.I can charge it in my house using led lights 75 watts bulb. I LOVE THIS CHARGERCON: I REALLY HAD TO NITPICK and it is compass. It is off by about 2 points.
Is this helpful?
Angel
I live in my car by choice and I needed something to help me not drain my car battery all the time and still keep my tech life going. I've been using this power bank for almost 4 months now and Im pretty pleased. The last one I got without solar cells needed replacing in less than a month so I got this one with my quickly processed refund. I've used it to power many devices including many phones, various Bluetooth headphones, my vape and e-pens, and whatever my friends need charged too. It's got enough capacity to charge my 4500mAh Note, ~3700mAh Pixel, 3500mAh vape and then charge one of them again before the powerbank needs charging again. It's a godsend. Charge the power bank by day, charge my devices at night.Omg speaking of night... I'm so glad it has 2 flashlights. One in front of it that's directional, and an enormously brighter one on the bottom. The bottom one will illuminate like 30 feet away. It's like 3/4 the intensity of a vehicle headlight from the 2000's decade. Not this newly-adopted halogen hodgepodge (j/k, halogens rock and I'm just jealous I don't have em ????).One of the most useful things about this bank is that you can use it to charge other devices even while it's charging itself. This works with both Solar and external charging inputs simultaneously. For example, sometimes if I'm chillin at a park and the battery is low, I'll put the power bank on my dashboard [Mind you I live in the US Pacific Northwest where median weather is not hotter than 80°F (26°C) from Summer til Fall]. I'll also plug my DC inverter's USB-C charger into the power bank to charge even faster. Since I can't plug in a usb micro and a usb-C device at the same time (unless they both have really really really thin frames around the prong) it leaves two USB type A female inputs to charge whatever else I need to.I have tinted windows in my car and I'm still able to get it receiving solar charging anywhere in the backseat. This thing has indicator lights on it that tell you when it's charging and it's nice to see that even on cloudy days, the sun breaks through and this thing's solar cells are sensitive enough to pick it up - albeit at a slower rate than normal.It's fallen off the dash as I drove off many, many...many times (it's so compact up there I forget lol) and it's still held up to the test. I would use the carabineer clip to secure it to my dash mount but I unclipped it and flung it somewhere so it's lost. Pretty sure my clumsy family need these.The instruction manual says to keep it out of direct sunlight - which is true of any electronic device. My advice to you is to charge in the brightest amount of shade you can and keep an eye on how the sun is moving (one inch every 8 minutes?). If you have to charge anywhere in direct sunlight, make sure you have sufficient, actual cooling in complete circulation around the device (example is suspend the bank using bottle caps and turn a fan on and direct the air at the device). This will keep it from overheating and you calling the company for a repair or replacement that could've been avoided.Good luck my sunchasing brethren. 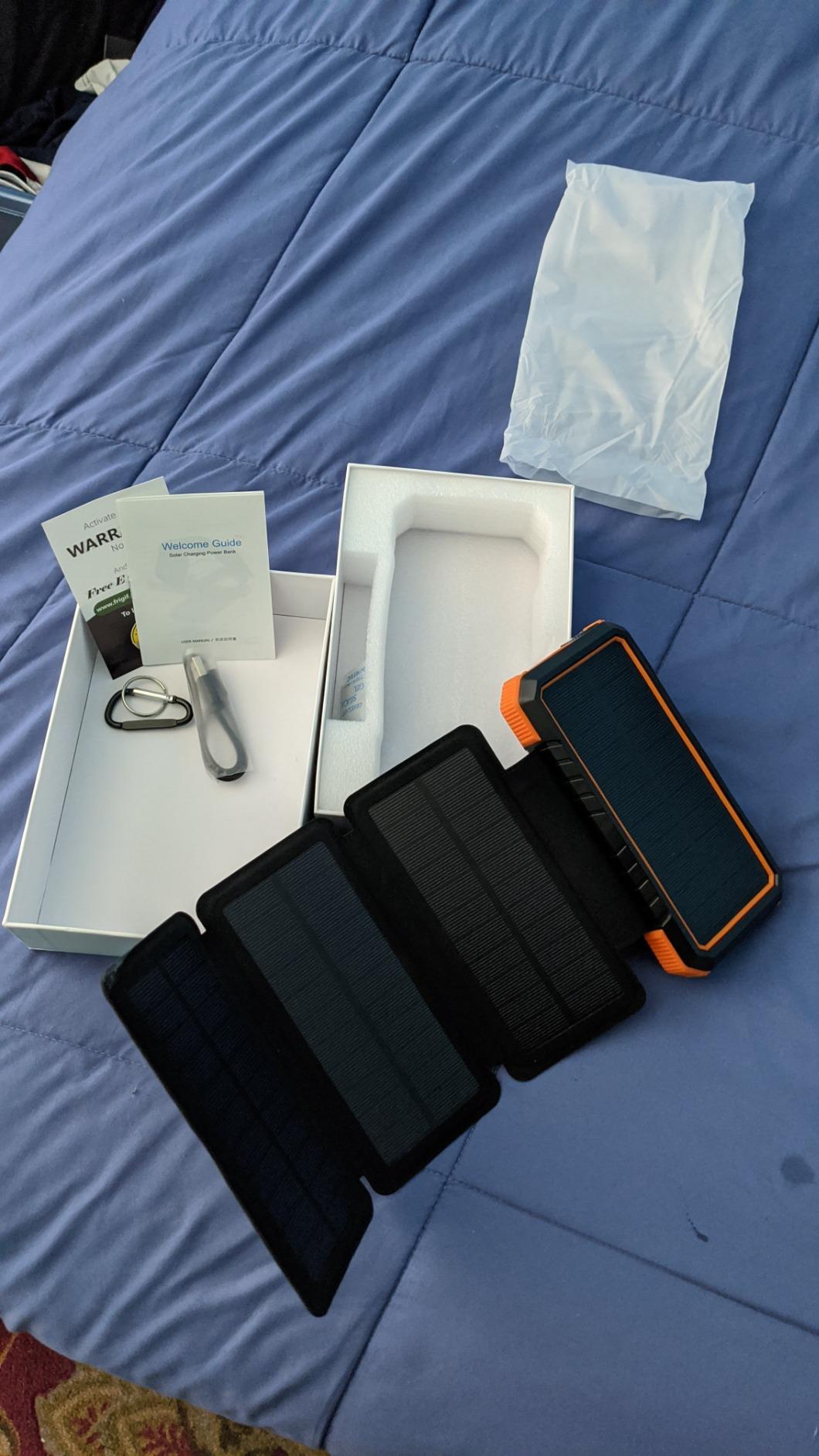 Is this helpful?
Willow
Living in California, I experience blackouts during the summer. Not having access to electricity means I can’t charge my phone. That last thing you want during an emergency is a dead phone without any way to make calls.Having a power bank that can also charge via solar is an added safeguard. Obviously, solar charging is a very slow process, but it’s still great to have just in case.Both flashlights work well. For those taking this camping or hiking, I’d say the power bank can be a bit on the heavy side. That said, the heavier weight is mitigated by a larger battery capacity.All and all, I’m very satisfied! 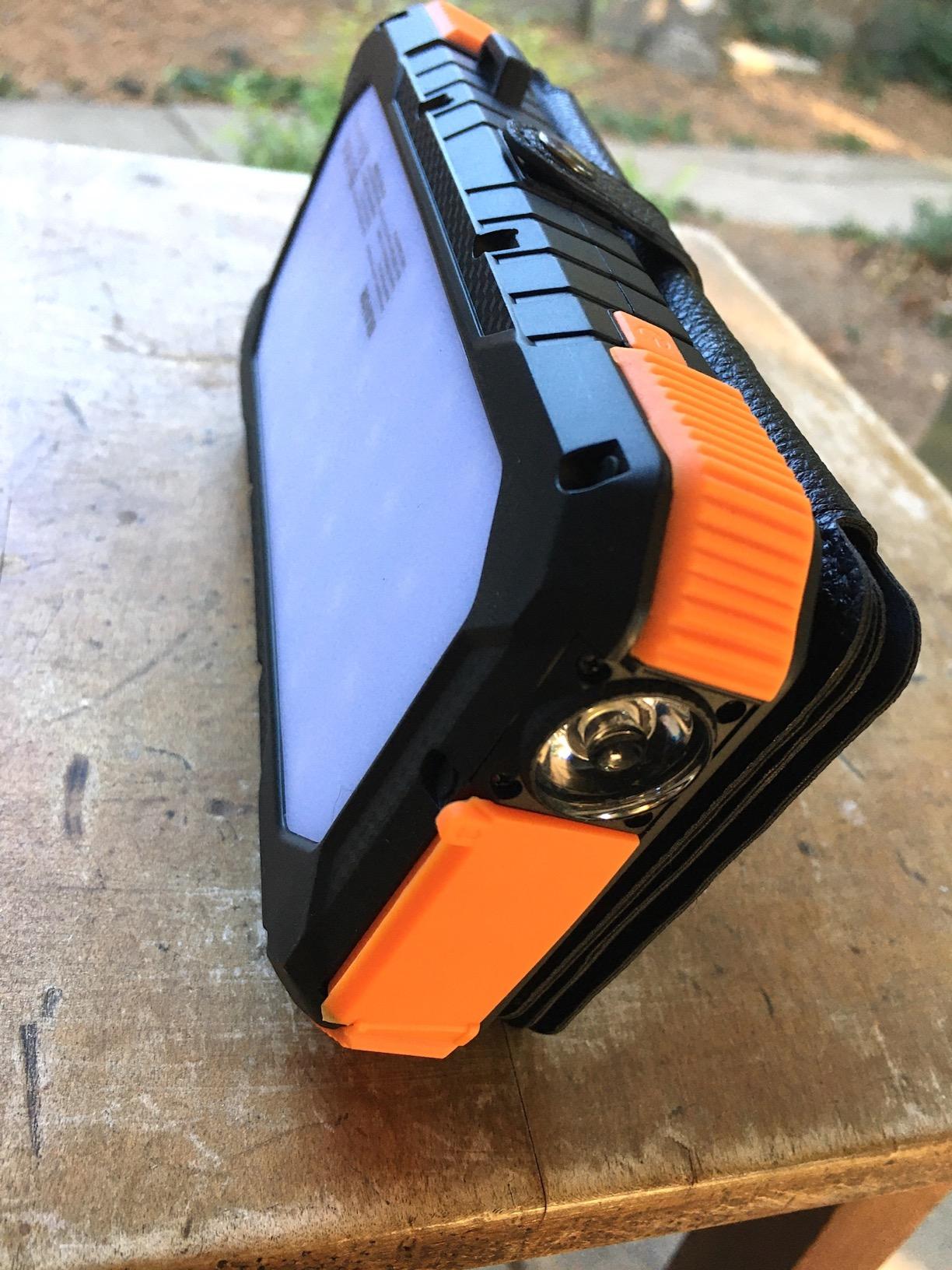 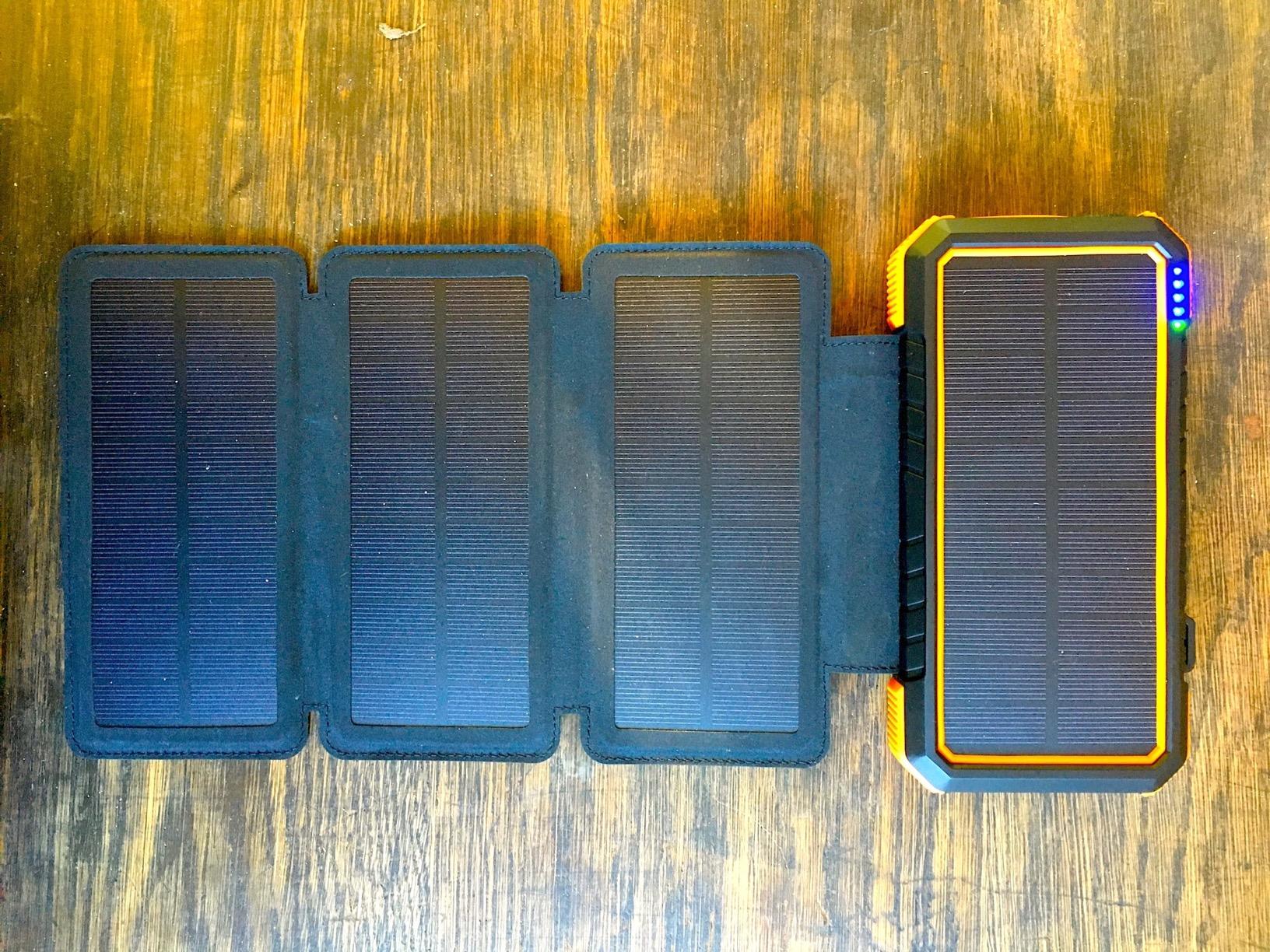 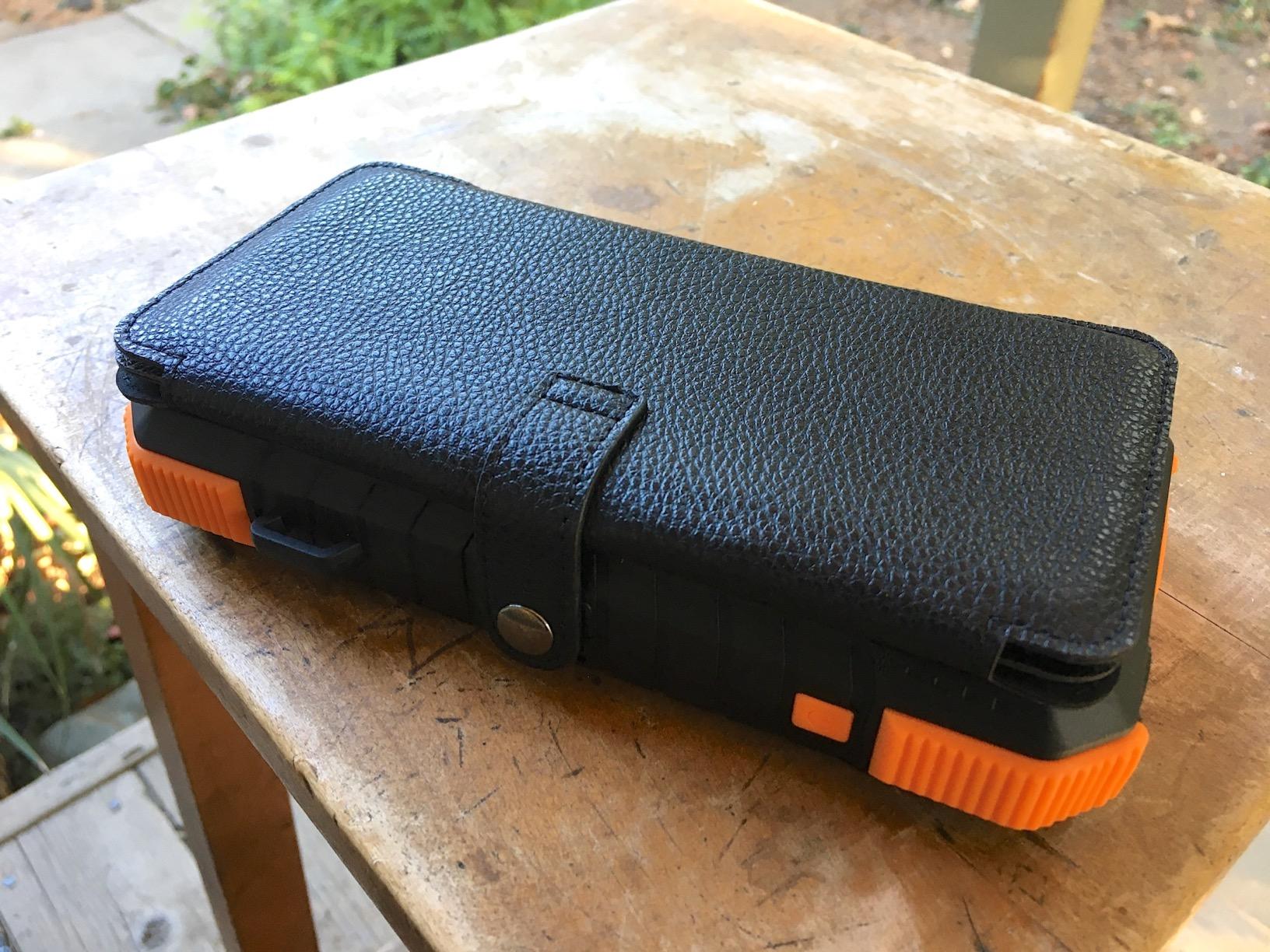 Is this helpful?
Jason L Kuehl
When I first unpackaged this power bank, I thought it's massive size would be a huge no-go for me, and it would get relegated to being in the truck with me, or tossed in a drawer and used if the power goes out. After a few days of torturing the power bank, I changed my mind on that. Yes, this is a huge power bank. But I charged and operated nearly every USB powered device I could think of for a full 3 days (yes, 72 hours) before it got down to a flashing LED indicator telling me it needed recharged. It has 2 USB out ports, and I was able to draw a hefty 3 amps combined from them, charging 2 phones at once. It appears to be a little biased toward the USB 3.0 port, with the device attached to it drawing 1.77 amps and the standard USB port delivering 1.23 amps. This bank also features both USB-C and microUSB ports for charging the bank itself. When this bank finally drew down to one flashing LED showing it needed recharged, I was very surprised. Connected to a standard USB power outlet, with a max output of 2.1 amp, the bank was fully charged in just under 7 hours. There is a built in flashlight with 3 modes (solid on, emergency/caution slow flash, and strobe) that is bright enough you don't want to look directly at it, and provides a well enough focused beam to make sure you can see where you are going. The camp light has 3 intensity levels, and if you use it indoors at night, the low setting provides enough light for two people to read by and still have the entire room lit.Solar charging is actually a huge positive for me, and this bank features a fold out 4 panel solar charger, that begins charging in fairly low ambient light, and gets stronger as the ambient light increases. The panels are stitched into a leather-like case, which does away with cheap plastic hinges that are prone to breaking, and snaps shut on one edge of the bank. I'm not sure how long it would take to charge the bank fully off solar alone, but the bank claims a total of 1.2 amp at 5 volts from the solar panels. After torturing this power bank for several days, I have come to appreciate it's bulkiness, and the fact that it comes with a carabiner so it can clip to my belt, as there is no way this will fit in my pocket! 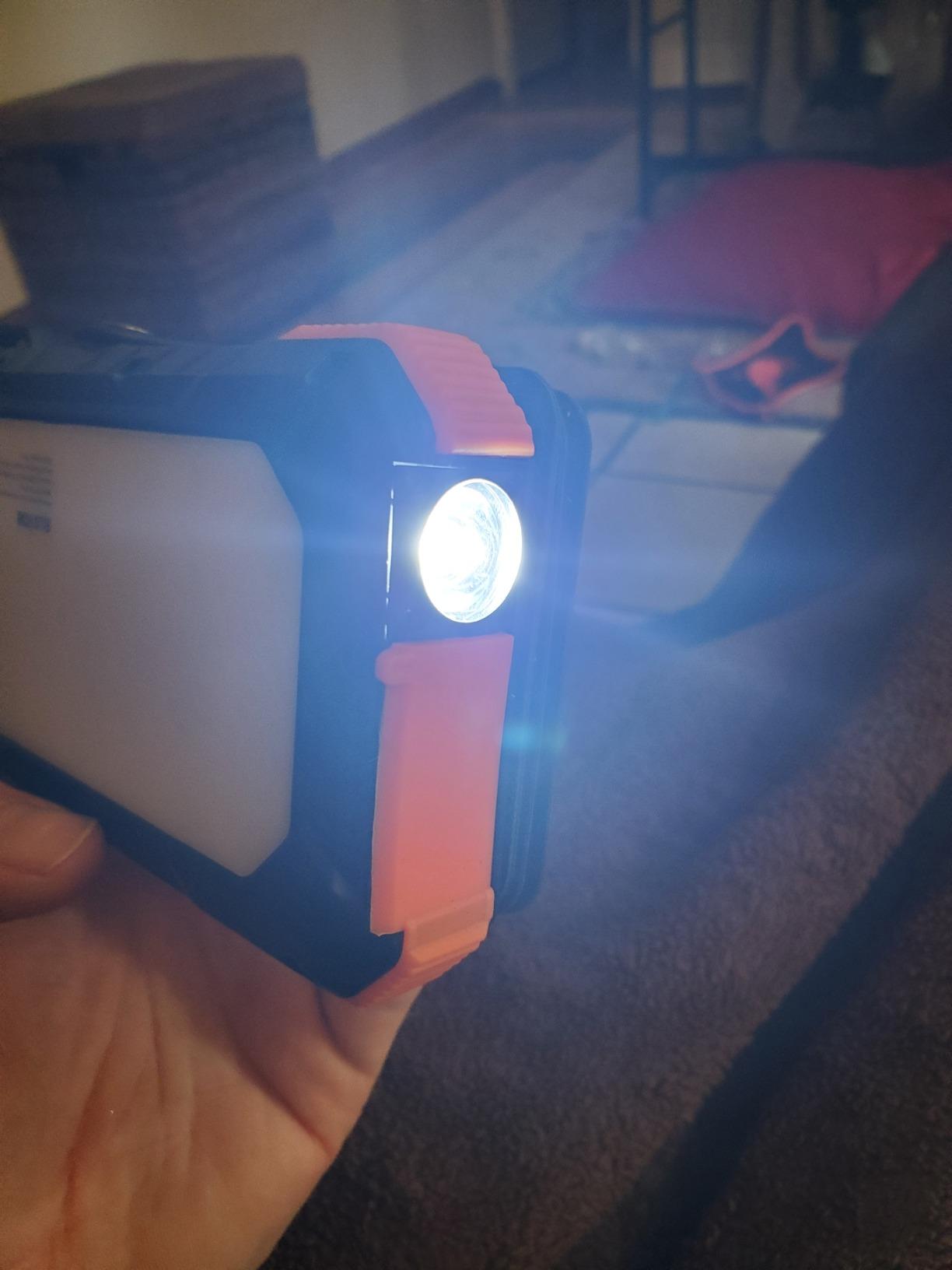 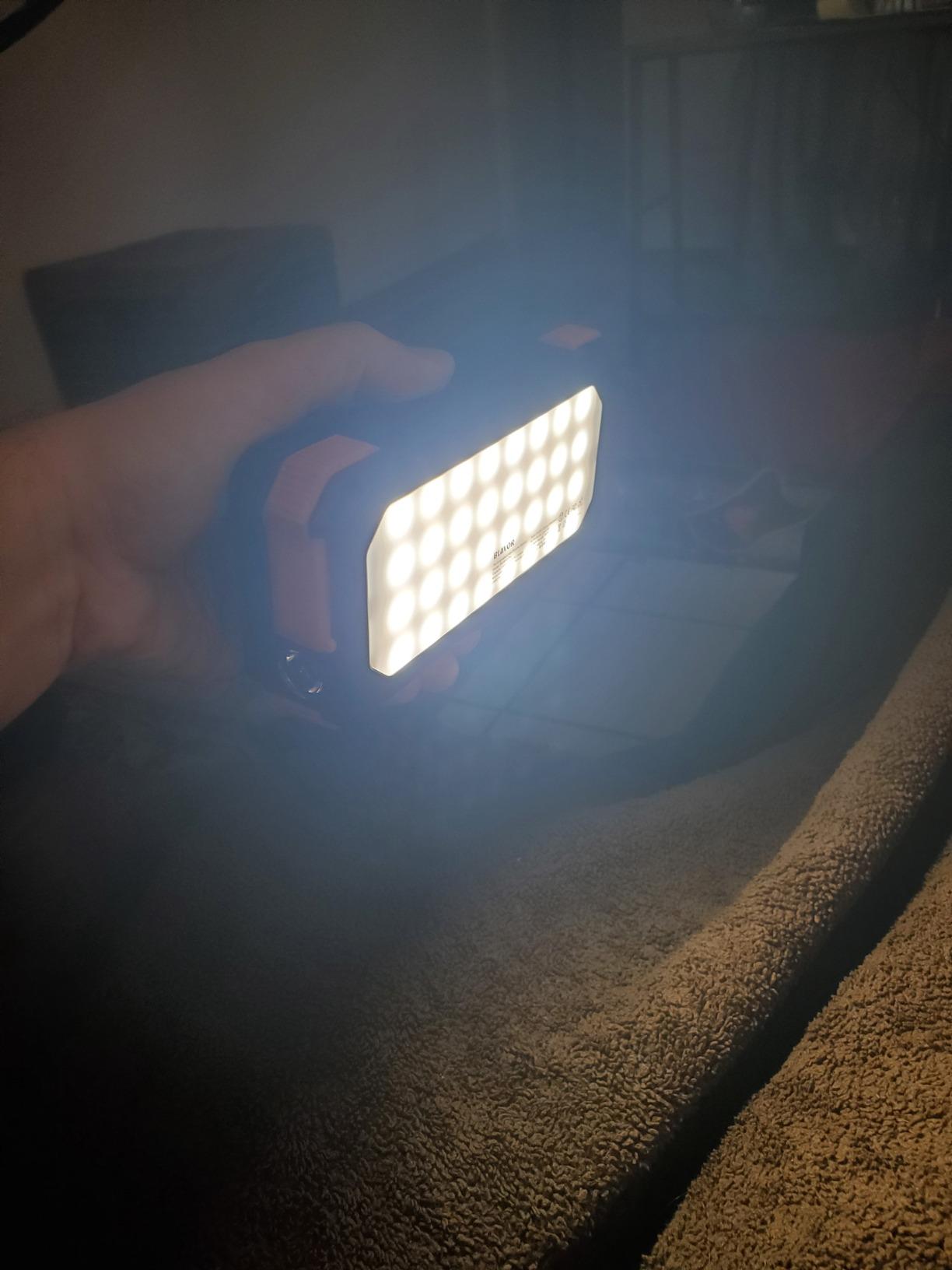 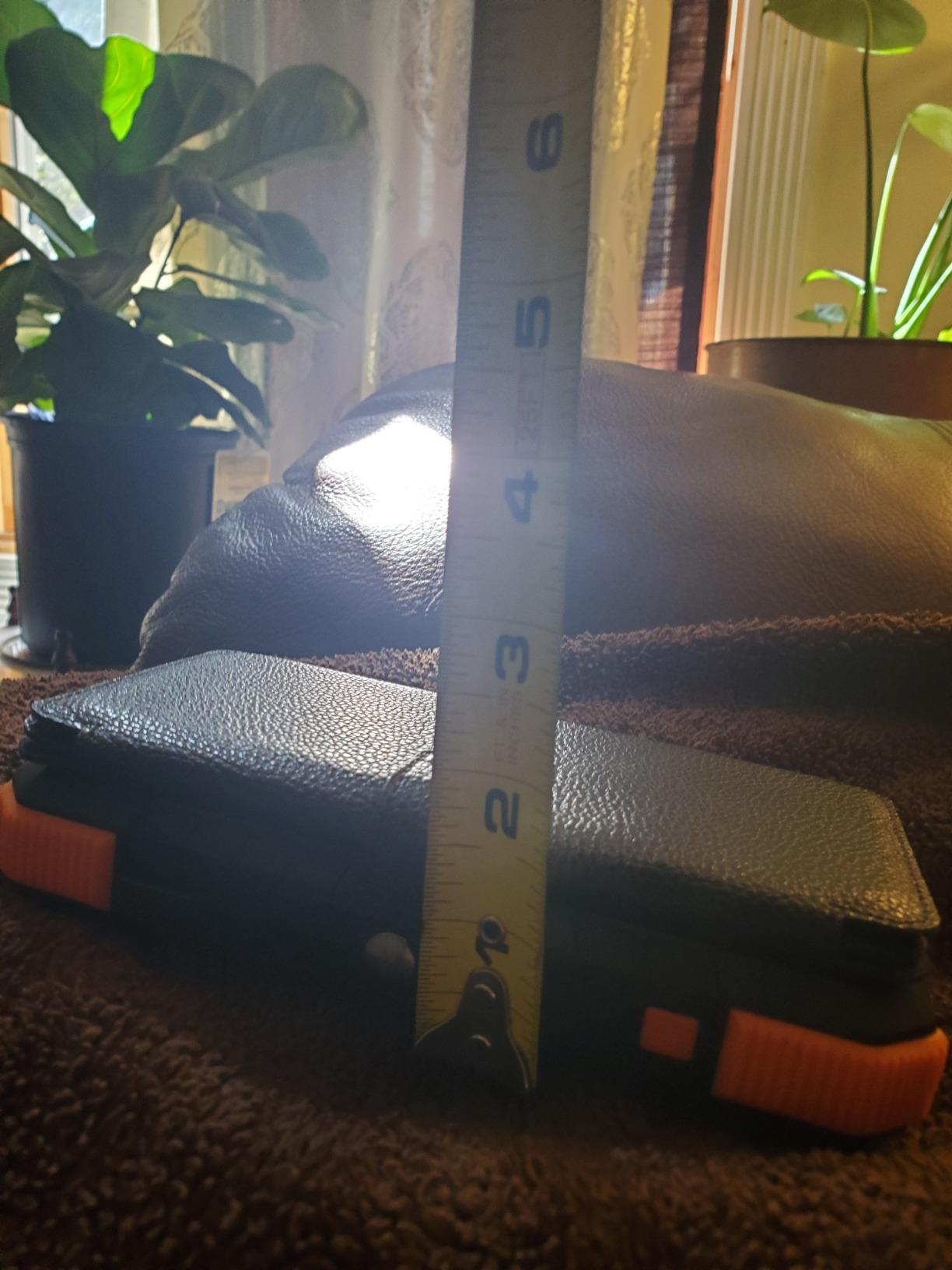 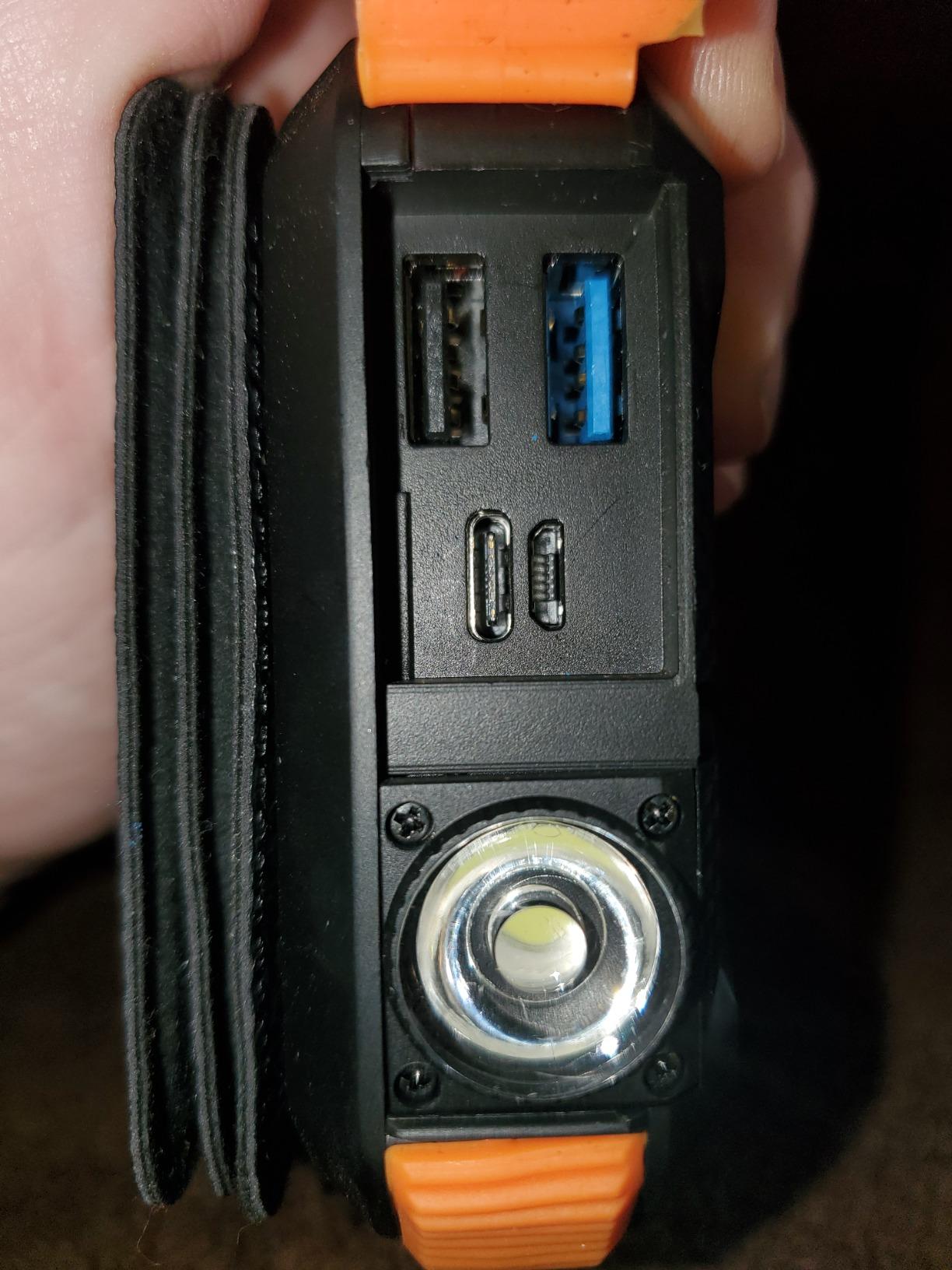 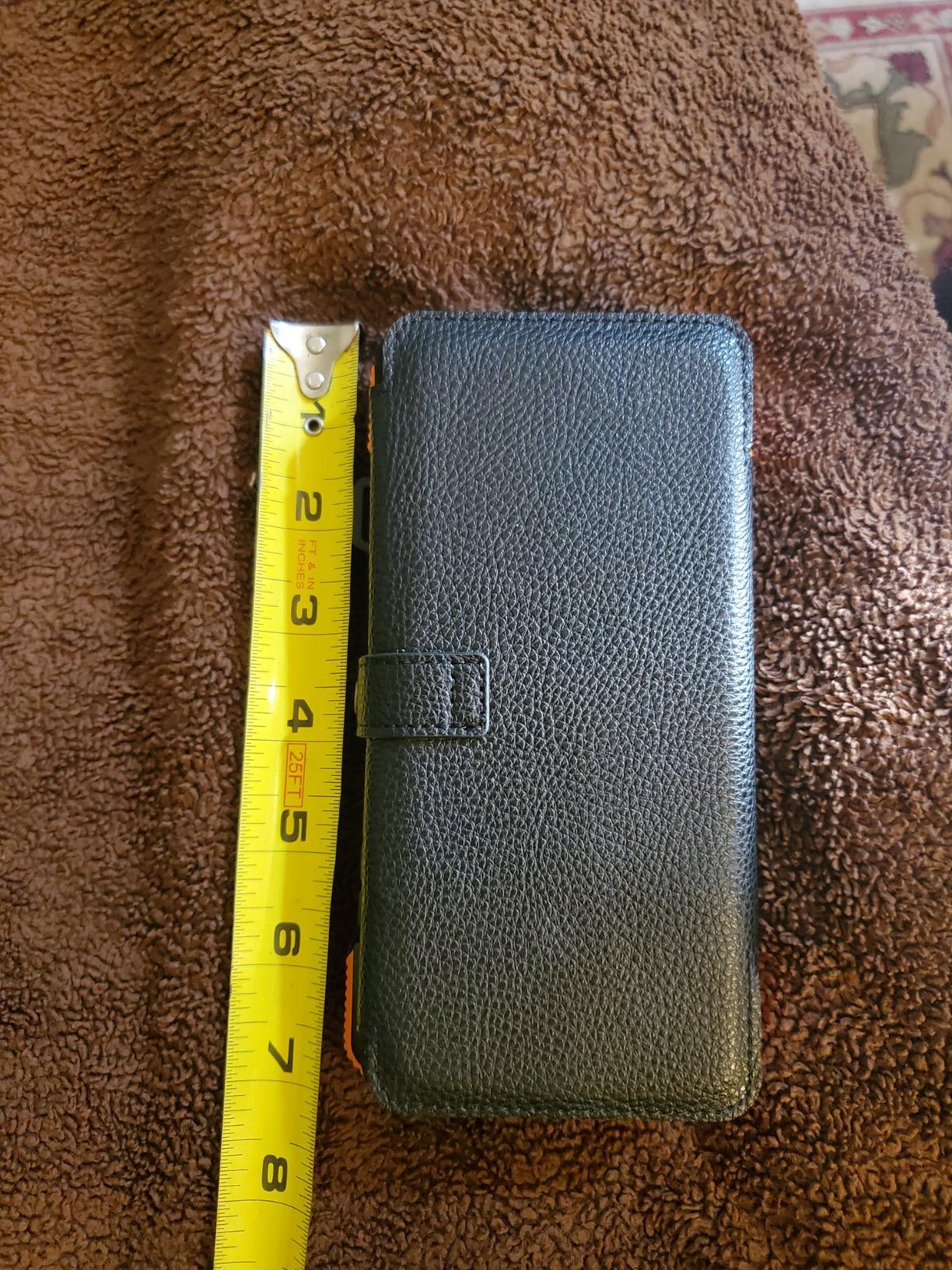 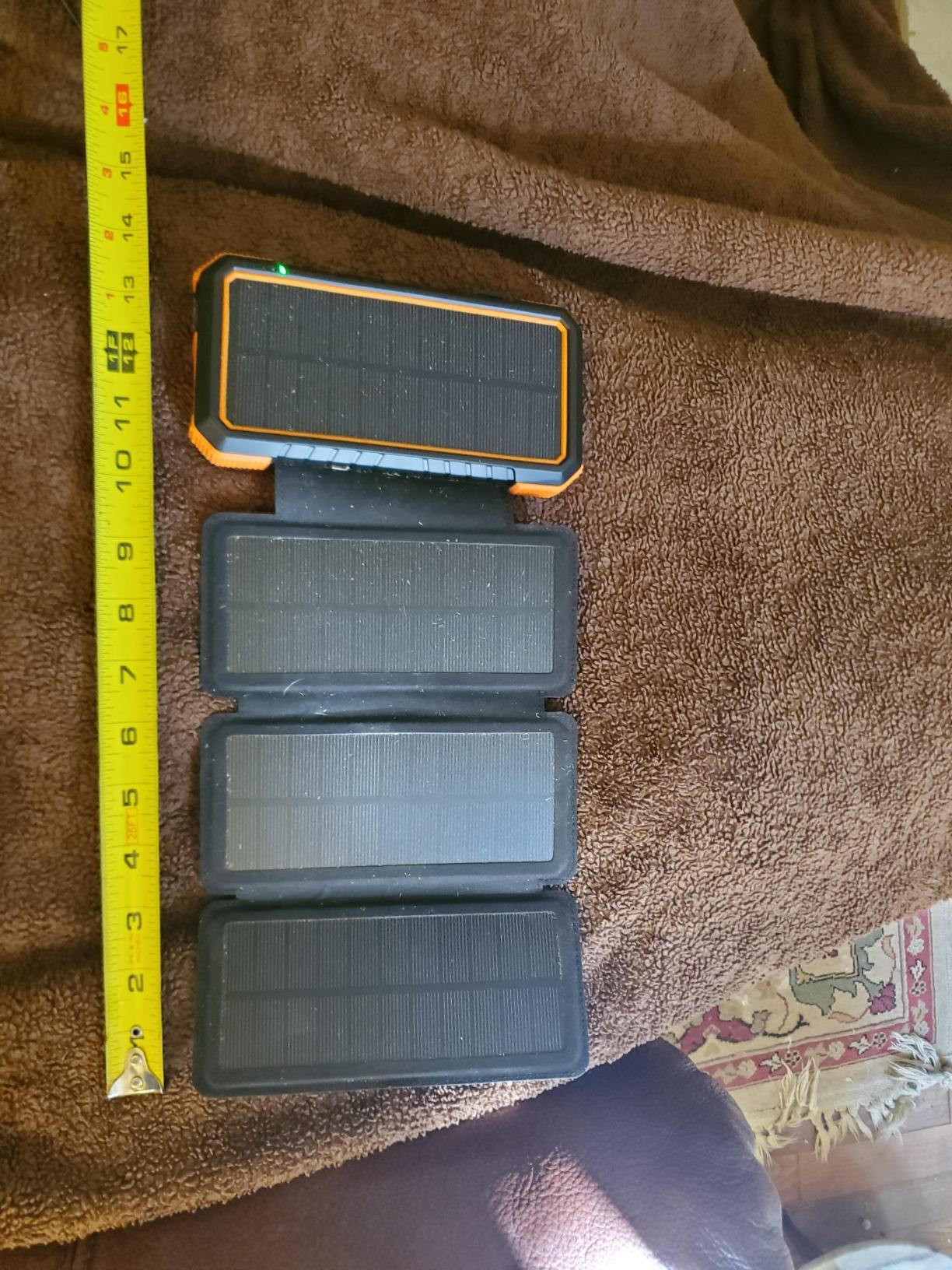 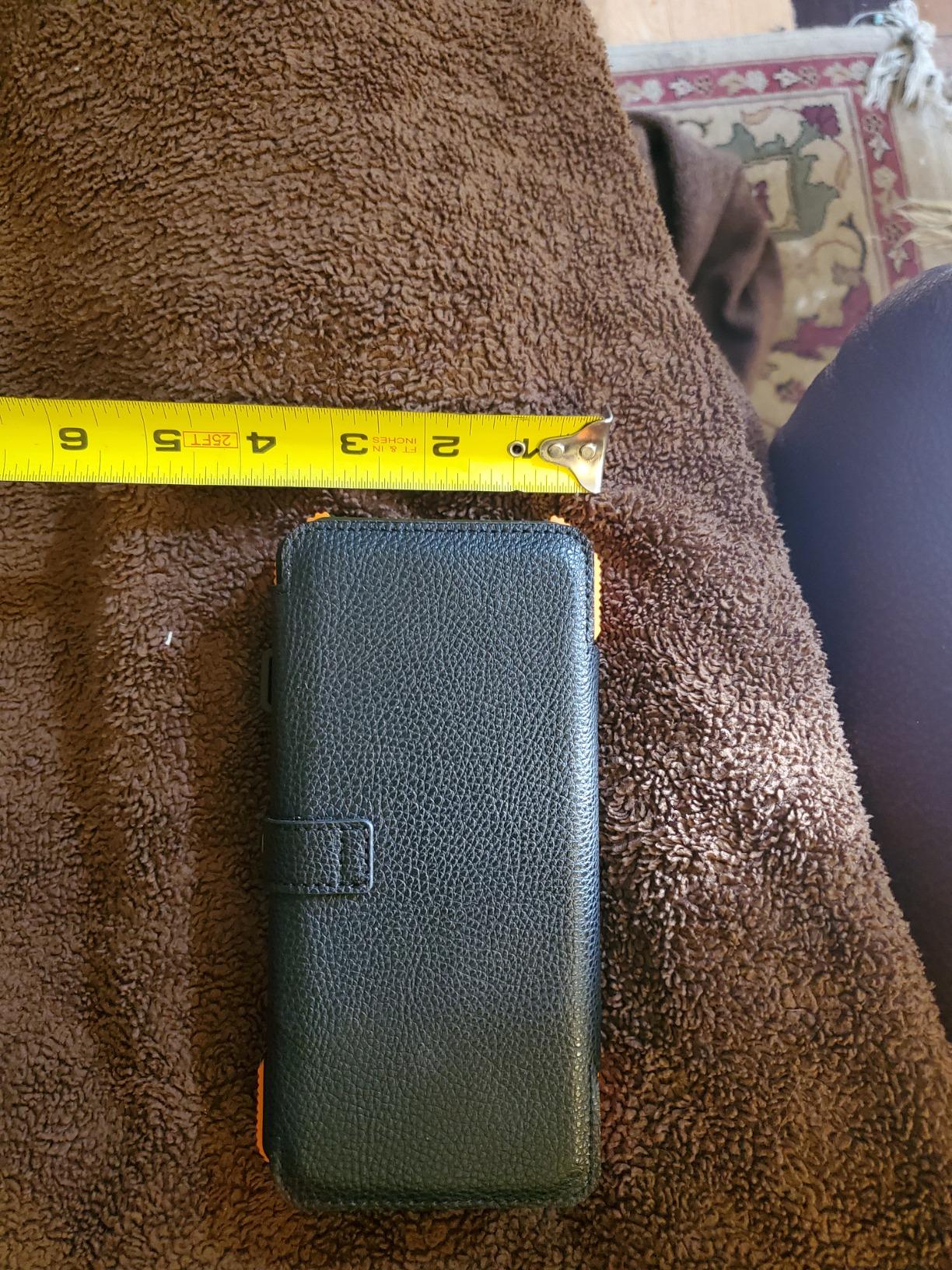 Is this helpful?
Steve
I'd been looking at chargers with a solar charging capability for running a Raspberry Pi. I have a few ideas I'd like to try out with regard to running the Pi without a power source, so I am hopeful that this unit with it's 4 solar panels will make that possible. When not in use for these hobby projects, I will most likely take it camping and hiking in case I end up needing to stay off-grid for awhile.I just received this unit the other day. It came already charged to about 80%. It also came with a small USB-C to USB cable and a nifty caribiner clip for attaching to a belt buckle. It has a built-in compass which could also come in handy in a survival situation.The idea with these batteries is to keep them as fully charged as possible with regular USB style charging, but then, if needed, the solar panels will supplement. The latter option will obviously take a lot more time.The battery sports a wide array of ports:* Type-C for both input (charging the battery) and output (toys!)* Micro USB port for charging the battery* 2 USB Ouputs DC 5V/3AI like it very much so far. It has a good hefty feel to it. The flashlight and charging features give me peace of mind. This is also a company that stands behind it's products so you may buy it with confidence. 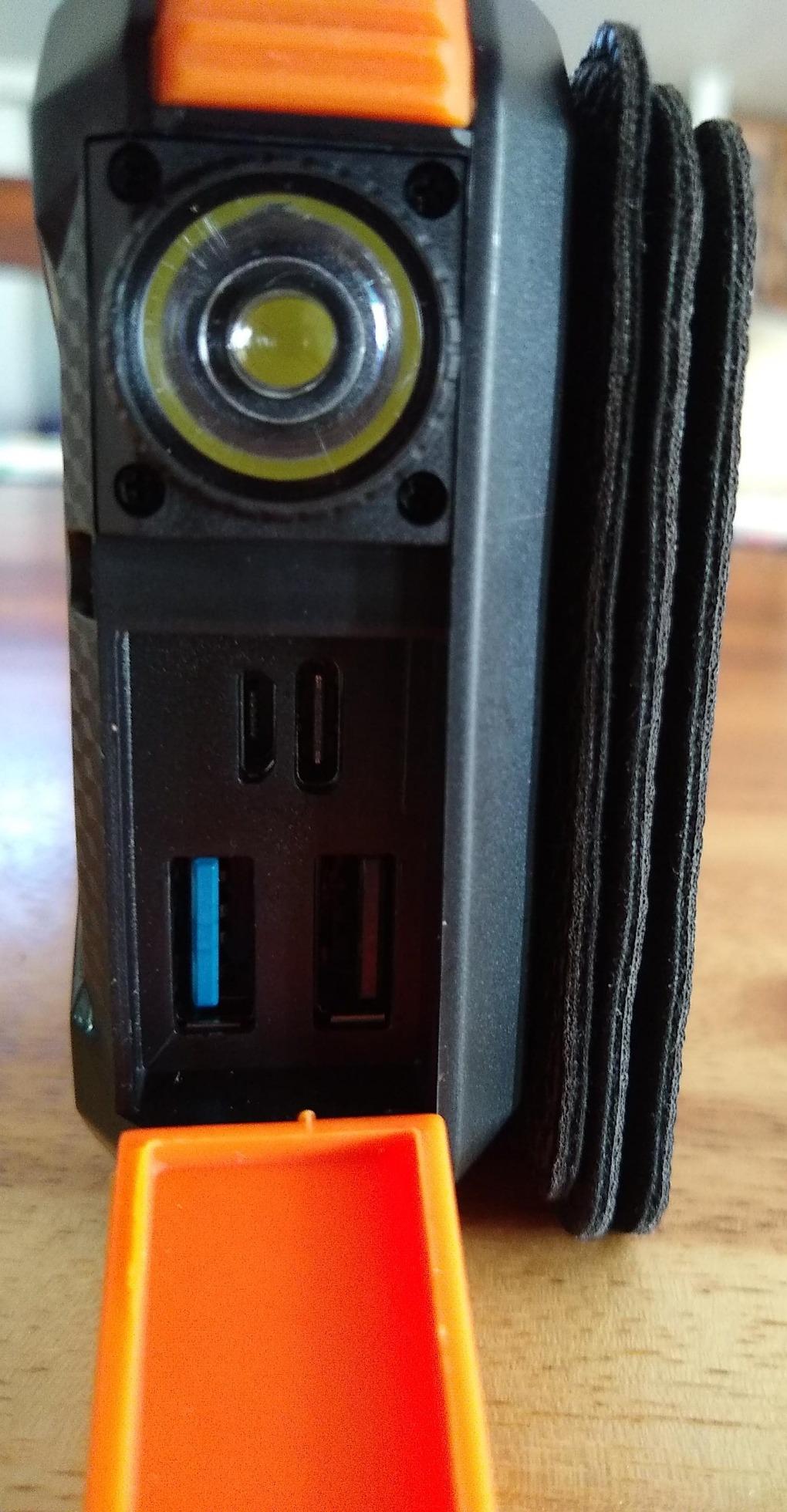 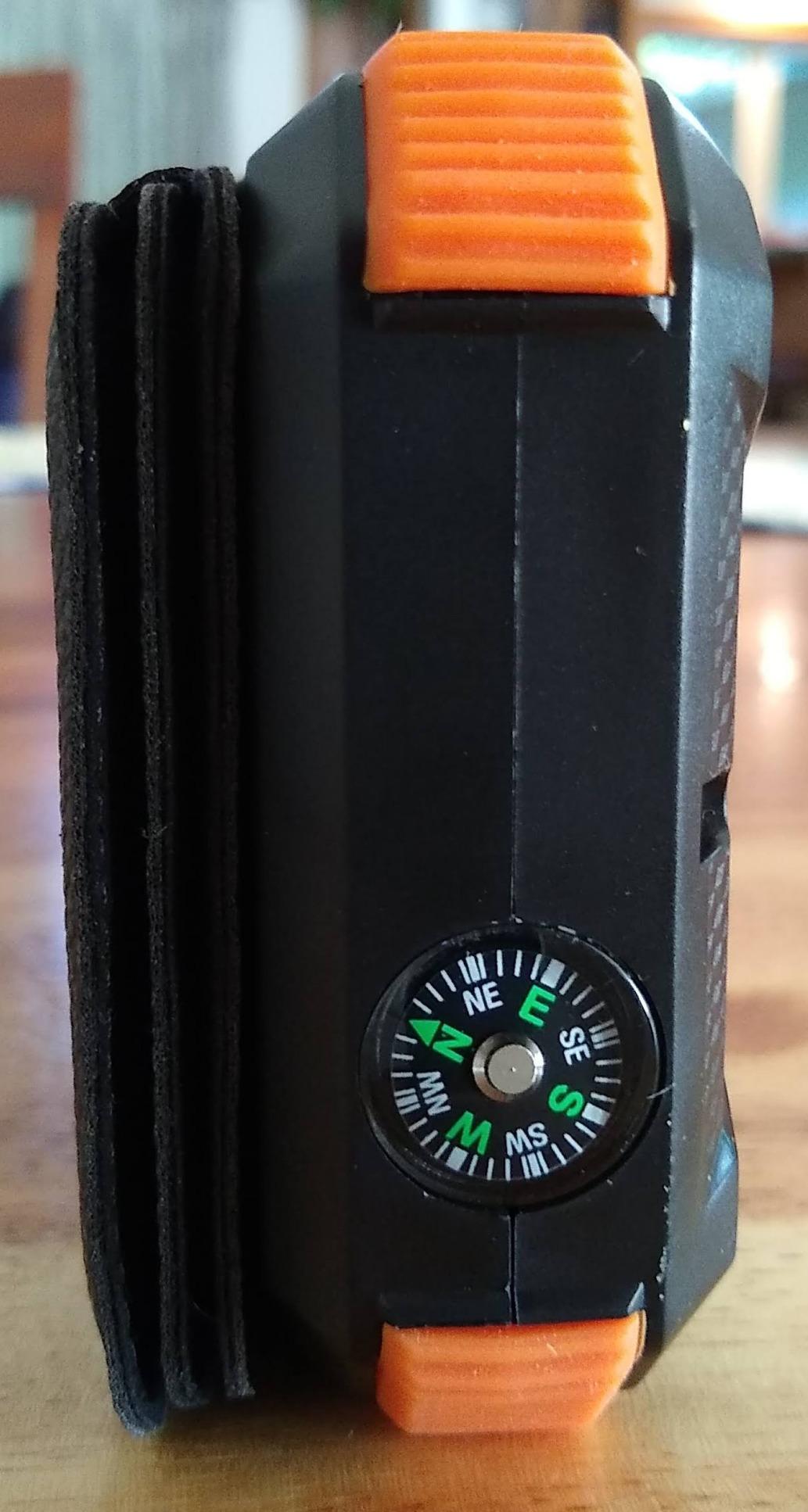 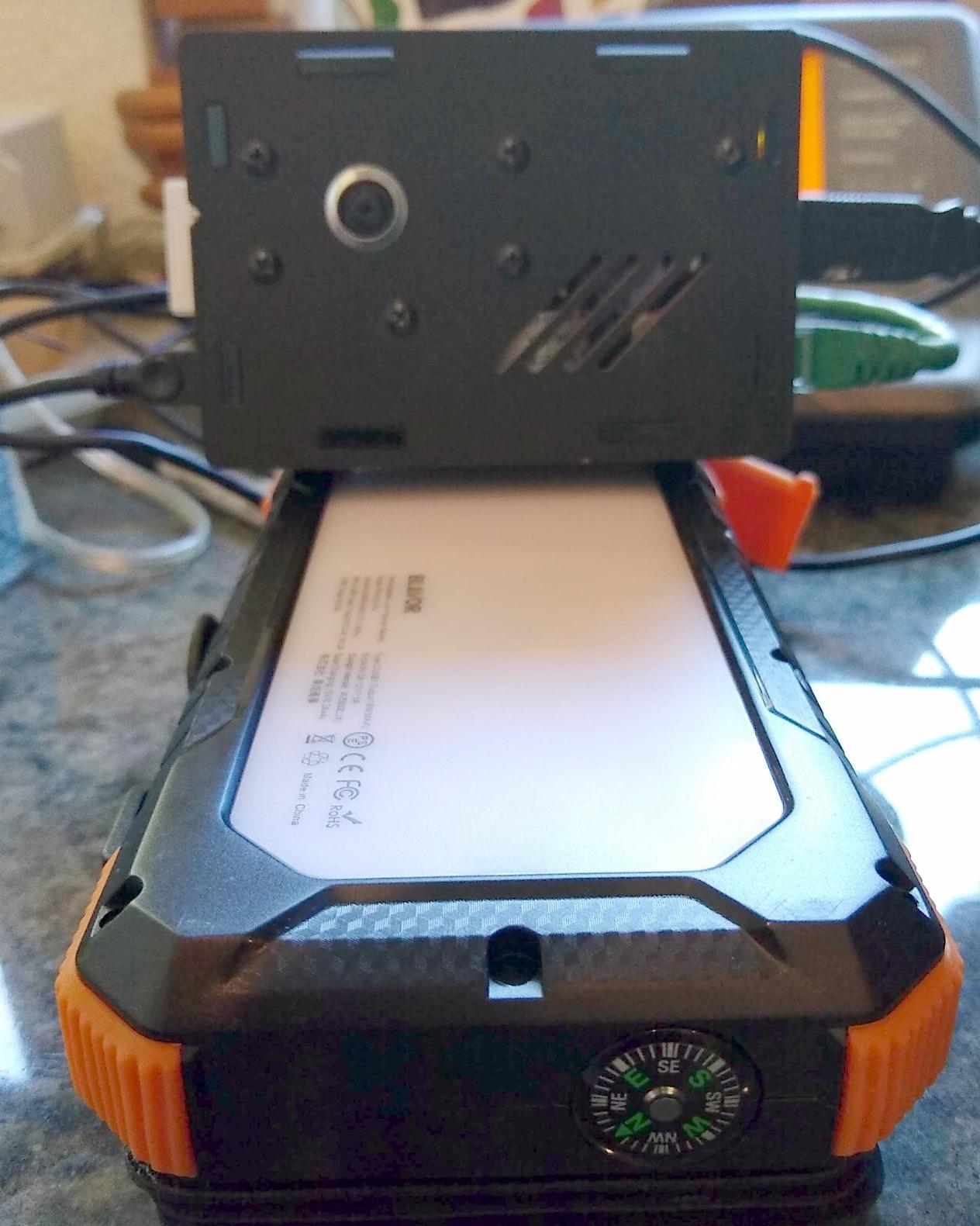 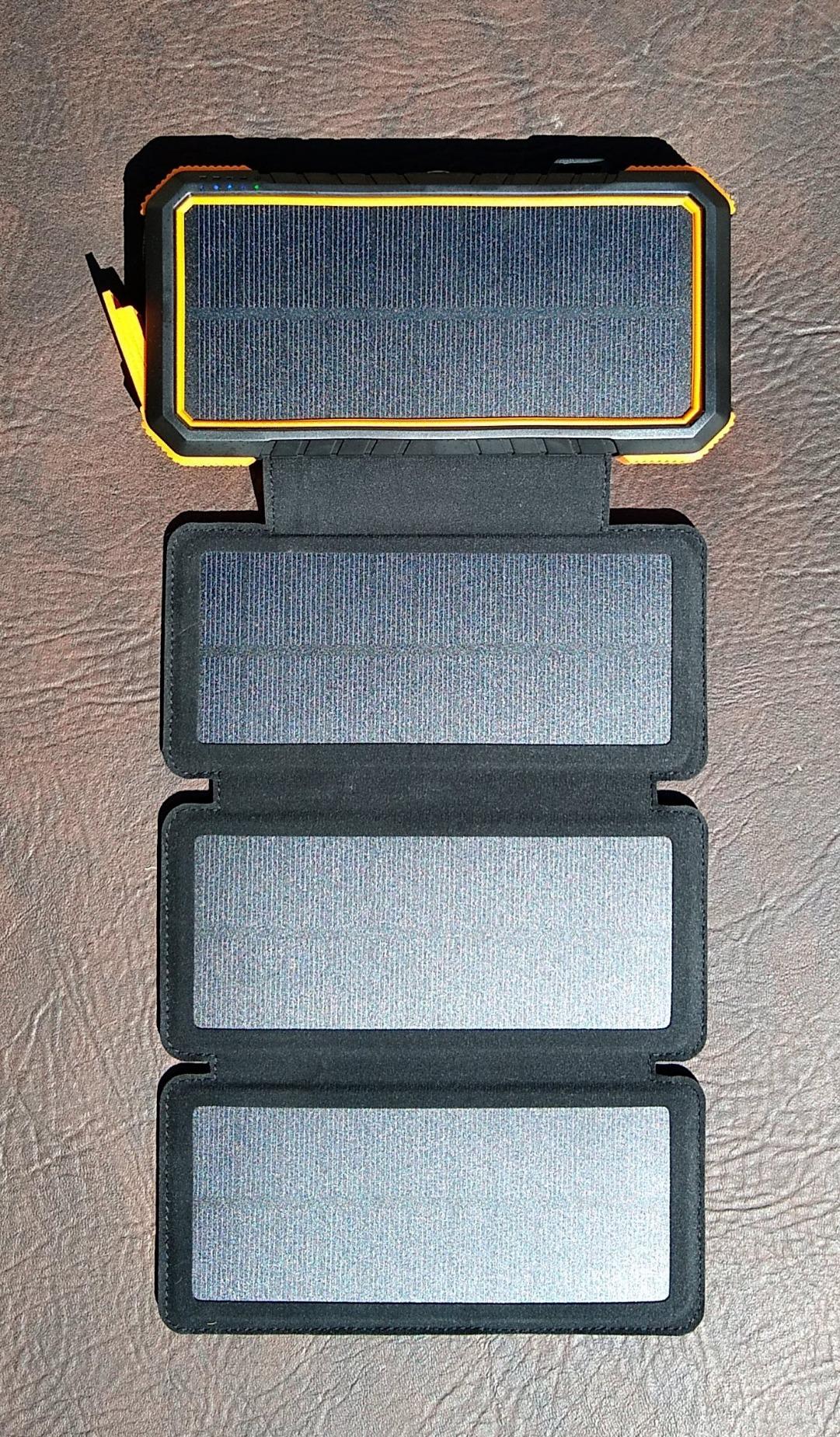 Is this helpful?
Heraldo
Good Battery & Light ComboI’ve had this unit 4 weeks now, used all the features and am pleased with it. The battery charges quickly from a wall socket, the solar cells charge the battery slowly because of excessive summertime heat which reduces a solar cell’s effectiveness, I anticipate the solar charging will increase during cooler weather. I can charge my Tablet, Phone and MP3 music player fully from one charge.The Camping Light easily lights a 10+ foot square area and has 3 light levels, hanging the light from above lights the entire area around a picnic table. The flashlight casts a 20 foot beam and the built-in compass is useful while hiking. The unit fits into the palm of my hand, the light switch is placed where it can be pressed by my thumb.All-in-all a good tool for keeping a variety of electronic devices charged and the lights are handy for out door activities. 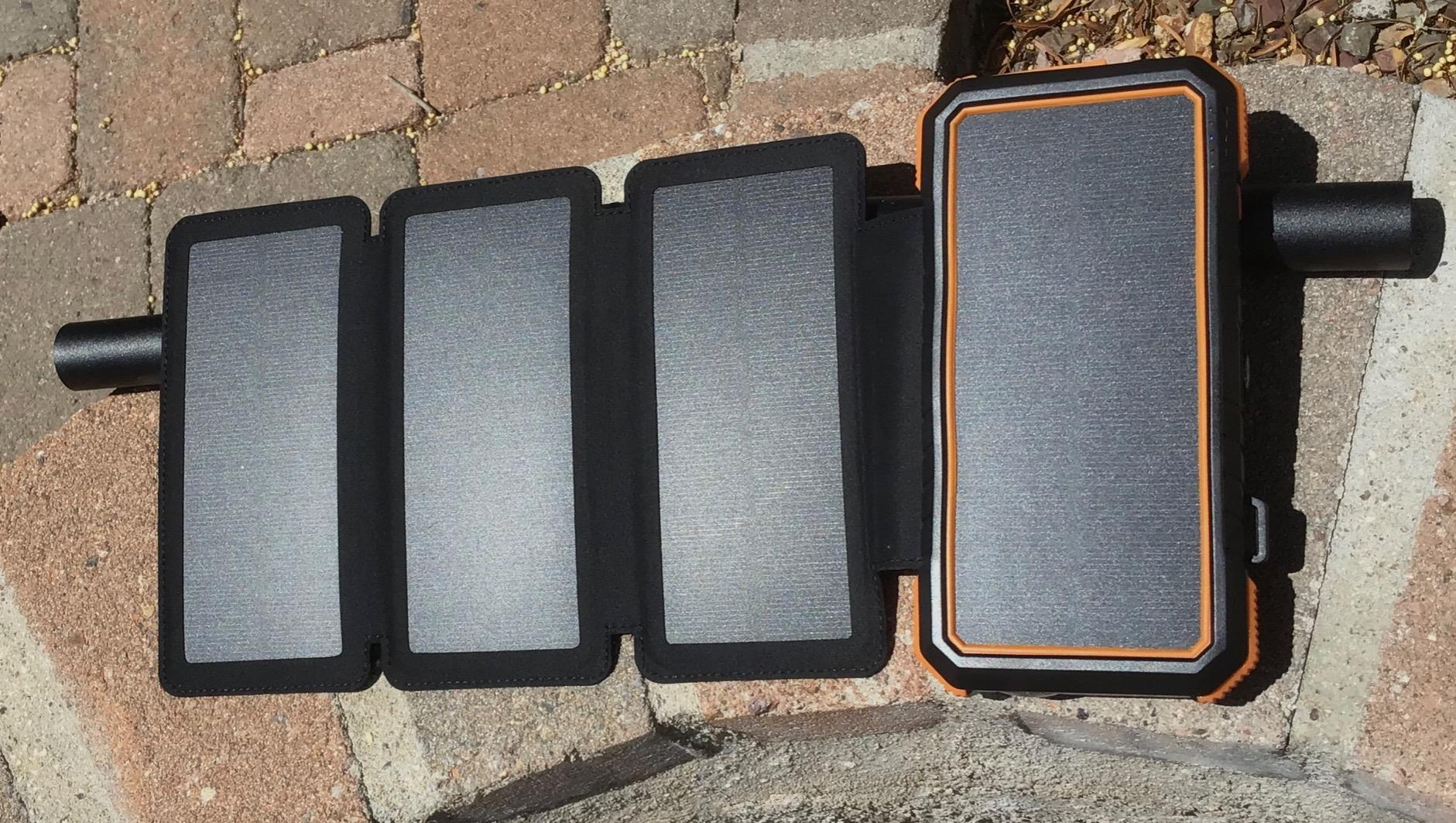 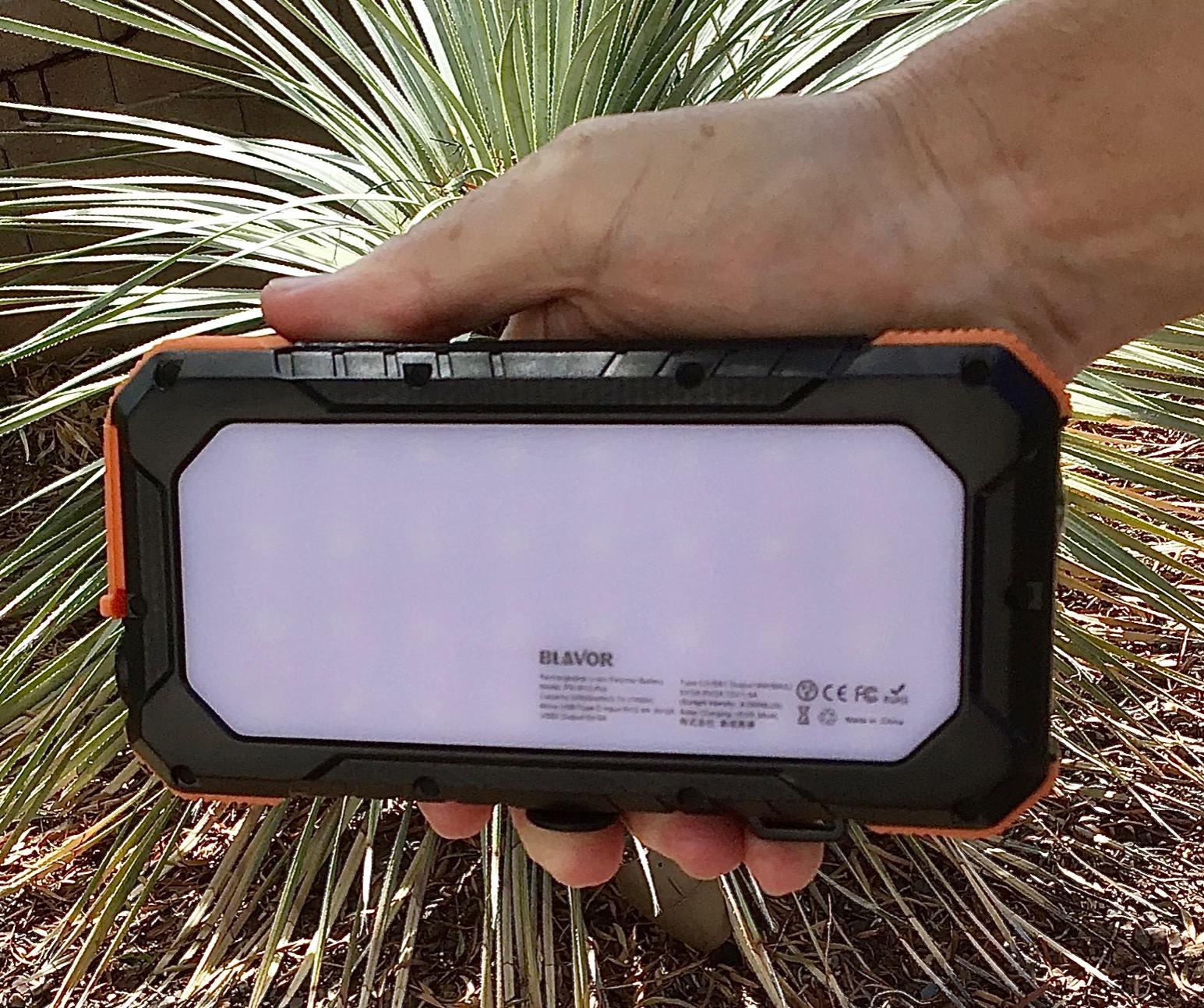 Is this helpful?
John Smith
This is my 2nd Blavor product. This is the model PN-W12 Pro. Improvements: 1) added a snap closure for the solar panels 2) flashlight added vs light panel on back of charger. Much improved, easier to use. 3) added carabiner hook to use while hiking or outdoors.Product is high quality and is perfect for anyone as backup battery charger. Solar charging panels seem to be improved as well. Charges even in low light conditions.Very happy with this product. Would definitely buy again!