Rate can't be blank.
Name can't be blank.
Email can't be blank.
Content can't be blank.
Thanks for your review! it will be published soon. Thank you! your review was submitted
JTJ
Update: The seller of this product was very quick to send us a replacement when the clips broke. Products will all eventually break but how often do the sellers actually honor the warranty? This company does! Order with confidence, don't expect a problem but if one occurs, know that the company will make it right! This is a GREAT stick blender and far more powerful than most on the marketThis mixer worked great for the first 7 months with zero issues. Unfortunately, if you use it regularly as we do, the plastic clips that hold the stick to the motor portion break no longer holding the unit together. In reading other reviews, the bottom line is this unit is just not well built.
Is this helpful?
John Ra
My wife has been looking for a replacement for her old immersion blender. This is our first time buying a mueller product and I have to say that I was pleasantly surprised. I was originally lookimg at All-Clad and Braun blenders. I thought that the quality was a direct representation of the price. Well my wife was not having it and would not let me spend that much money. So I settled on this and boy did it impress us both. It handled everything that we threw at it like a champ. It didn't overheat, over vibrate/shake, struggle, smell like a cheap electric motor or anything like that. I can't speak of the durability as we've only had it for a few months but we absolutely love this blender. We highly reccomend it.
Is this helpful?
Josh
As far as immersion blenders go, this one is great. It is solidly built, easy to clean, and with 500 watts, has plenty of power. For the price, it’s fantastic. I’ve used it for several soups and it has blended whatever I put before it.As far as whisks go, it is a little much for some tasks. Even at the lowest speed, it will whip your eggs into a froth or blast through any of the more delicate things that might need a little more finesse. Honestly, I’m not sure why the whisk attachment was included as the blender on its own is more than worth the price.That said, first and foremost, you’re buying an immersion blender here and for that you really can’t beat the quality and price.
Is this helpful?
farm folk
In looking for a new hand blender I felt fortunate to find this one by Mueller. Honestly the first thing that caught my eye was Made in Austria (not China). At 500 watts this one is more powerful than most, the steel feels substantial and the attachments are very easy to change. I've only had it a week and so far have used it to blend egg batter and emulsify salad dressing. I am impressed with how fast it is and cleanup is super easy. I had one of those small many multi function super blenders and gave it away, too difficult to use and store. This one is perfect for my needs, no frills just a very sleek tool for a serious cook! 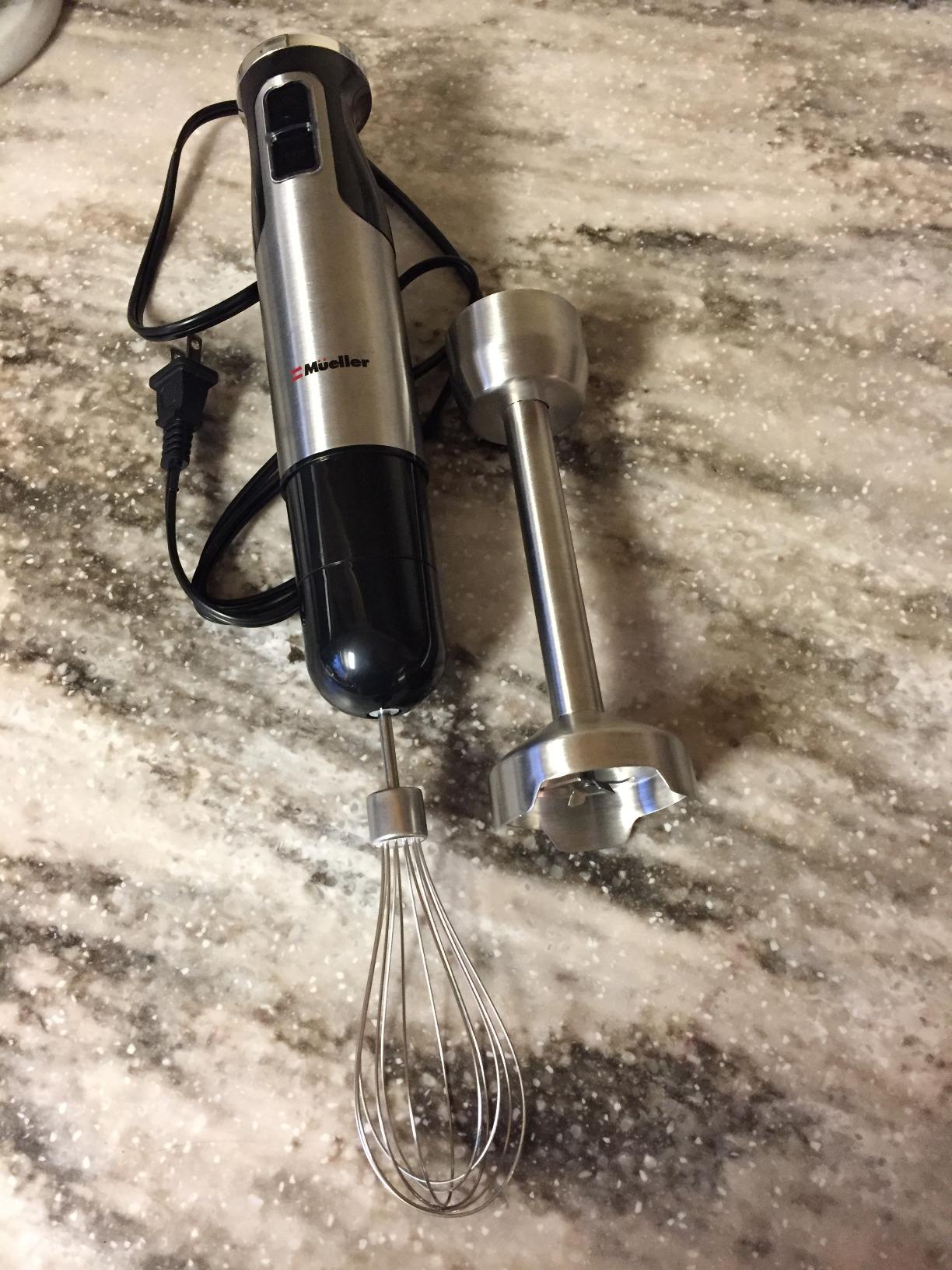 Is this helpful?
Alfymom
This is a highly efficient blender. I'm an extremely ineffective user. I bought it hoping that it would ease the mess that I hate to clean when I make smoothies. So... it's me, not the blender. I guess I have to put less in the jar AND not turn on the blender until the blades are submerged to avoid spraying smoothie all over the kitchen. But, the blender is powerful enough to send a poorly-assembled smoothie mix to all ends of the kitchen and dining room. Once the volume of the jar's contents was low enough, the blender worked to produce a wonderfully smooth and deliciously blended smoothie.Now for the cleanup.
Is this helpful?
Dennis McIntire
So well made and easy to use and clean! I am on the keto diet and make my "bulletproof coffee" every morning. It has variable speed or instant turbo, but because it is so powerful, it wants to suck the blender to the bottom of the large stainless steel mixing cup. I've found that if you lay the top of the shaft against the top of the cup, the base of the stick keeps the mixer from being pulled down and mixes better. Be sure to release the spring loaded power switch before lifting up the blender to help mix the drink more, or you'll have a mess on your hands. ;)It comes apart with a simple twist, but if you put some soap in the container you just mixed in and repeat the process, you can clean both the stick and the container.
Is this helpful?
Nol
Worked great, feels sturdy, took on boiling temperature to blend, but the top of the shaft stayed cool. Great buy! 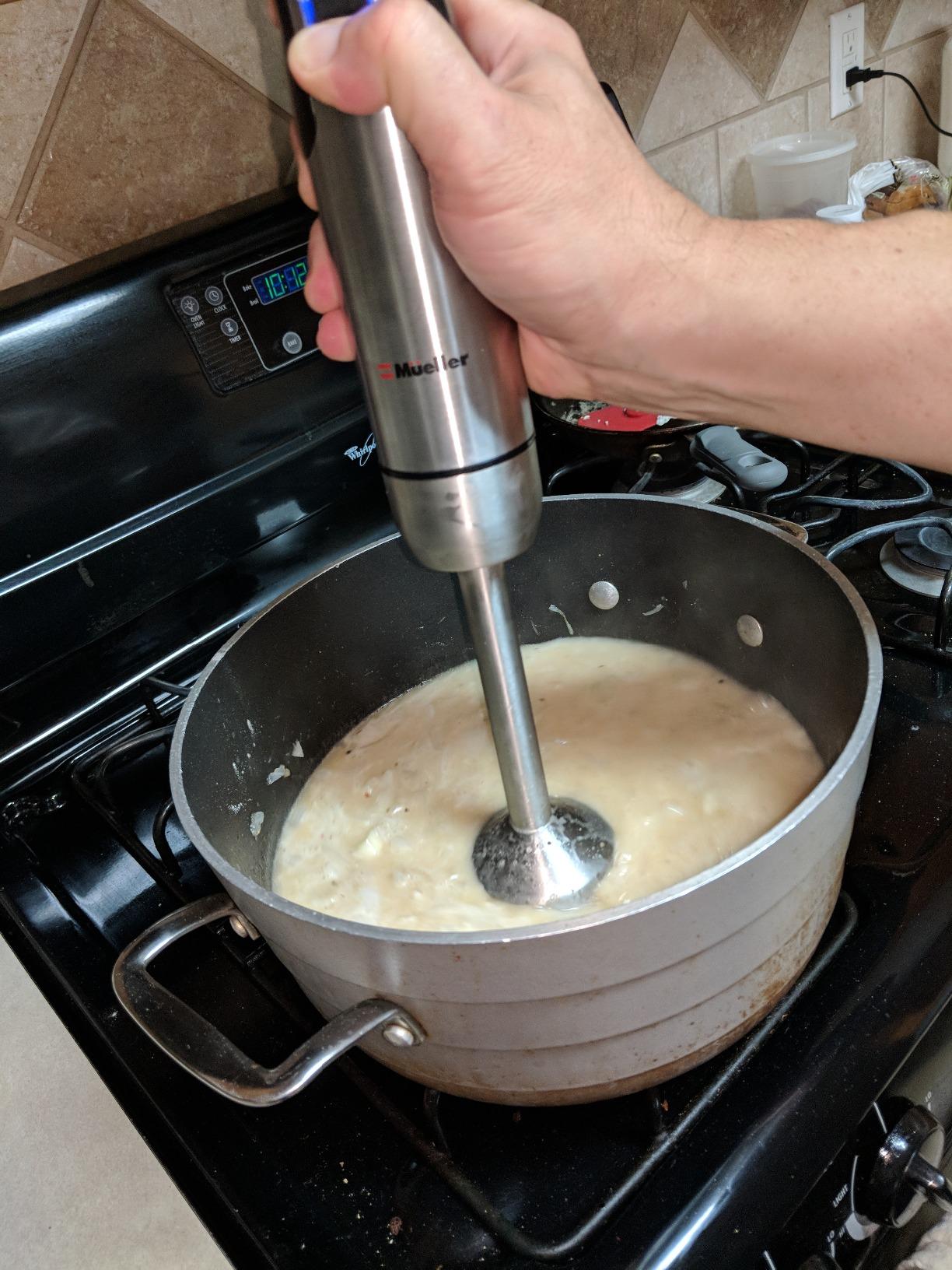 Is this helpful?
Hokie1969
This unit replaced an Oster unit that failed when the blade came spinning out into the pot of soup that I was blending. The Ultra-Stick, which cost about the same as the Oster is superior in a number of ways. The first is really a safety feature. When you plug it in a soft blue light glows around the buttons and top reminding the operator that the unit is ready to cut. There is no comparison to the quality. As you would imagine, the mass of the stainless steel Mueller is much greater than my old plastic blender. The power is much greater than you would expect for an immersion blender at this price even featuring variable speed control that is effective for both the regular and turbo speeds.
Is this helpful?
Clara
I got this after my old stand blender burned out while I was grinding oatmeal. I thought a stick blender would be able to work through dry ingredients a little better and keep from overheating. I'm happy to say that is the case. This little thing is very powerful for its size and really chops whatever you set it to. Its easy to assemble, disassemble, and clean and works great. The only thing I don't like is that the cord gets in the way and knocks things over while you're using it, but that will probably be something that you get used to and can work around with practice.Some people have commented that you can only use this for a minute at a time, trust me that is plenty. It is meant to be more of a pulsing blender and you move it around enough that a minute of actual operation will likely work through whatever you are blending.
Is this helpful?